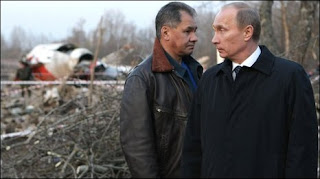 This is truly bizarre, a plane carrying the upper echelon of the Polish government crashes on the way to commemorate the Katyn Massacre practically at the site of the massacre. Julia Ioffe from True/Slant has more:

"This morning, a crappy, Soviet-era Tu-154 was headed from Warsaw for Smolensk (near the site of the massacre), but found that its ability to land was hampered by the fog. It tried to land again and again, with no success. On its fourth attempt, the plane grazed a tree, which ripped off its back section, and sent it hurtling into to the ground at 10:50 a.m. local time.

Every crew member died, as did all the passengers. Among them were the Polish President, Lech Kaczynski, his wife, the head of the National bank, the vice speakers of the Sejm and the Senate, the chief of staff, the head of national security, the Olympic committee head, the deputy defense minister, and a row of senators.

Vladimir Putin, newly reconciled with the Poles, said he would personally oversee the investigation.

Stranger than fiction, as they say."
Posted by WINston smITh at 3:38 PM

And if we raise our eyebrows Putin will just explain how they stole our Wellstone plane crashing technology from us.

very sorry for the plane crash.