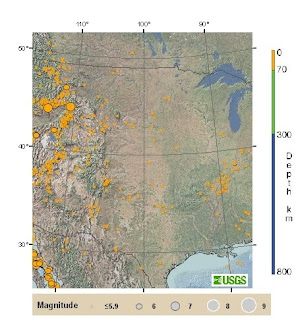 Global Research has a thought provoking article on the subject of Fracking and recent earthquakes in normally seismically dormant Arkansas:

"The last four months of 2010, nearly 500 earthquakes rattled Guy, Arkansas. [1] The entire state experienced 38 quakes in 2009. [2] The spike in quake frequency precedes and coincides with the 100,000 dead fish on a 20-mile stretch of the Arkansas River that included Roseville Township on December 30. The next night, 5,000 red-winged blackbirds and starlings dropped dead out of the sky in Beebe. [3] Hydraulic fracturing is the most likely culprit for all three events, as it causes earthquakes with a resultant release of toxins into the environment. [4]

A close look at Arkansas’ history of earthquakes and drilling reveals a shocking surge in quake frequency following advanced drilling. The number of quakes in 2010 nearly equals all of Arkansas’ quakes for the entire 20th century. The oil and gas industry denies any correlation, but the advent of hydrofracking followed by earthquakes is a story repeated across the nation. It isn’t going to stop any time soon, either. Fracking has gone global."
Posted by WINston smITh at 9:35 PM 1 comment:

RAP NEWS 6 - Wikileaks' Cablegate: the truth is out there

Posted by WINston smITh at 9:01 PM No comments:


Chris Hedges, Daniel Ellsberg, and Ray McGovern among others were arrested outside the White house on December 16th in an action which was universally ignored by American media. The descent into corporate fascism, as Gil Scott-Heron would say, will not be televised.
Posted by WINston smITh at 9:38 PM No comments: