Volcanoes and Humanity, An Uneasy Relationship 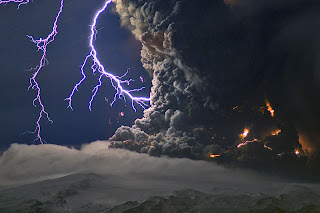 The Icelandic volcano is a reminder that natural forces have profound and unexpected effects on human activity.The more complex the human technology the deeper the implications. There is now concern that the effects of this eruption might be felt for years to come as noted in the Timesonline:

"The wider economic consequence to our ‘just-in-time’ society is incalculable at this stage given the disruption to holidays, business plans and indeed the wider business supply chain. However, the global cost of the disruption will surely ultimately result in a cost of billions rather than hundreds of millions of pounds.

It is exceptionally hard to gauge how long the current grounding of flights will remain in force, although Eyjafjallajökull, the Icelandic volcano which has erupted, could potentially sputter on for months or even more than a year. Much could depend upon weather patterns, especially wind direction, over the next few days.

The worst-case scenario in terms of precedent here is the 1783-1784 eruption at Laki (a very large eruption of 14km3 compared to the one in Mount St. Helens in 1980 of 1 km3) that had a huge impact on the northern hemisphere, reducing temperatures by up to 3 degrees. This led to catastrophe far beyond the shores of Iceland (where 25% of population died), with thousands of recorded deaths in Britain due to poisoning and extreme cold, and record low rainfall in North Africa."

The article goes on to also make an argument for the role of climate change:

"At the end of the last ice age, the rate of eruption in Iceland was some 30 times higher than historic rates. This is because the reduction in the ice load reduced the pressure in the mantle, leading to decompression melting there. Since the late 19th Century the ice caps in Iceland have been shrinking yet further, due to changing climate. This will lead to additional magma generation, so we should expect more frequent and/or more voluminous eruptions in the future."
Posted by WINston smITh at 10:37 PM