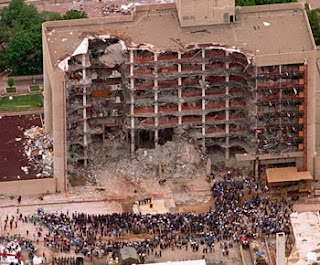 Mark Juergensmeyer has one of the more erudite commentaries on Christianic fundamentalist terrorism in America. It is no exaggeration to say that Christian fanatic organizations have the most developed terrorist networks in the United States today.

"Christian terrorism has returned to America with a vengeance. And it is not just Roeder. Last week, when members of the Hutaree militia in Michigan and Ohio recently were arrested with plans to kill a random policeman and then plant Improvised Explosive Devises in the area where the funeral would be held in order to kill hundreds more, this was a terrorist plot of the sort that would impress Shi'ite militia and al Qaeda activists in Iraq. The Southern Poverty Law Center, founded by Morris Dees, which has closely watched the rise of right-wing extremism in this country for many decades, declares that threats and incidents of right-wing violence have risen 200% in this last year — unfortunately coinciding with the tenure of the first African American President in US history. When Chip Berlet—one of this country's best monitors of right wing extremism warned in a perceptive essay published last week on this website that the hostile right-wing political climate in this country has created the climate for a demonic new form of violence and terrorism, I fear that he is correct." read more
Posted by WINston smITh at 9:13 PM

I like that they questioned for “Public Defenders” (and they thought they could bring down our government), undercover FBI agent, sweet. Since their inception the Teaparty crowd (not a movement since they do have the numbers or clout) because they are haters not debaters or as others have dubbed them screamers not dreamers. The simpleton Tea baggers are the same whiners that were crying when the McCain/Bailin ticket lost. Now that their yelling and screaming disastrous to stop the shape care debate and the bill from passing they are crying again. Lets face it the Republicans had eight years to deal with shape care, immigration, climate change and fiscal oversight and governance and they disastrous. The Republicans are excellent at starting wars (two in eight years, with stout contracts to friends of Cheney/Bush) but not at winning wars as seen by the long-lasting line of body bags that keep coming home. Instead of participating in the shape care debate of thoughts the Republicans party turned inward to your ancient fashion obstructionist party. In my opinion the Republican Waterloo loss was caused by the party allowing a small parts (but very loud) of the republican party of “birthers, baggers and blowhards” to take over their party. I will admit that this fringe is very excellent at playing “Follow the Leader” by listening to their dullard leaders, Beck, Hedgecock, Hannity, O’Reilly, Rush, Savage, Sarah Bailin, Orly Taitz, Victoria Jackson, Michele Bachmann and the rest of the Blowhards and acting as ill plotted robots (they have already acted against doctors that perform abortions). The Teaparty crowd reckon they can scare, intimidate and break down others to go along with them by observations like “This time we came unarmed”, let me tell you a touch not all ex-military join the fringe militia crazies who don’t pay taxes and run around with face paint in the parks playing commando, the majority are mature and know that the world is more complicated and grey than the black and white that these simpleton make it out to be and that my friend is the point. The world is complicated and presidents like Hamiliton, Lincoln, and Roosevelt judge that we should use government a small to increase social mobility, now its about dancing around the aver of government is the problem. The sainted Reagan passed the largest tax increase in American history and as a result federal employment increased, but facts are lost when mired in mysticism and superstition. Although some Republicans are trying to distant themselves from this fringe most of them, having no game plot/ vision for our country, are just going along and fanning the flames. For a party that gave us Abraham Lincoln, it is tragic that the ranks are filled with too many unfilled suits. But they now aver they have changed, come on, what sucker is going to judge that? All I can say to you is dredge up Waterloo.