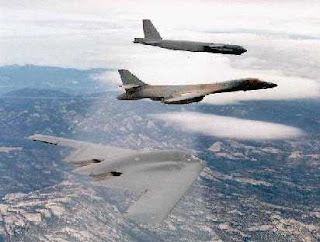 While I'm a fan of disarmament the recent agreement between the U.S. and the Russian Federation does stretch a few concepts particularly the difference between bombs and bombers as noted by the Federation of American Scientists:

"The treaty does not even approach territory that would call for a fundamental rethinking of how we deploy our nuclear weapons. As the military would say, the treaty protects the force structure. That is, we will still have a triad of bombers and both land-based and sea-based ballistic missiles, another obsolete artifact of the Cold War that dates back to fears of a disarming first strike from the Soviet Union (and inter-Service competition). Even Air Force advocacy groups such as the Mitchell Institute have considered eliminating the nuclear mission for the manned bomber and moving from a triad to a dyad of land- and sea-based missiles. In fact, the treaty contains a peculiar counting rule that increases the importance of bombers: each bomber counts only as one nuclear bomb although the B-52 can carry 20 nuclear-armed cruise missiles and the Russian bombers, for example the Backfire and Blackjack, have similar payloads. If we define corn as a type of tree, then suddenly Iowa would be covered in forests. If we define a bomber with 20 bombs as a single bomb, then suddenly we get a substantial reduction in the nuclear of weapons. (Hans discusses the numbers in more detail.) This rule reportedly resulted from Russia’s refusal to allow the necessary on-site inspections at its bomber bases but it creates an important caveat on any claim of “reductions.”


"The way the United States and Russia will be counting bombers in New START has raised some questions about the treaty - the change in counting rules in effect means that neither side would have to make any substantial cuts to comply with the new treaty. (See the projections I published earlier and Hans Kristensen's analysis.)

The United States said that it was ready to count bombers with their actual weapons load, but Russia objected to the transparency provisions that this arrangement would entail. This is not the first time Russia gets a bad rap for resisting transparency, but I don't think this is the case here. As Hans Kristensen noted, they could have counted each bomber as carrying, say, ten warheads. No transparency is needed for that.

Another possible reason for Russia's position on bombers is that if they were counted with their real weapons load, the United States would have to find some other place to cut 400 warheads. Most likely this would have been done primarily by "downloading" SLBMs. The problem with this, of course, is that it would increase the U.S. "upload potential" - the ability to quickly bring the warheads back.

Whether or not that was the real reason and regardless of whether the concerns about the upload potential are justified, Russia appears to have been consistent in pushing for lower number of launchers and, if that is not possible, for keeping the warhead limit relatively high to avoid increasing the upload potential. We know now, for example, that it was Russia that insisted on putting 1675 into the "1500-1675" range agreed in Moscow in July 2009.

Whatever the real Russia's reasons, I am sympathetic to its position - reducing the number of warheads just by offloading them from missiles and keeping the capability to bring them back intact is not real reductions. Nuclear weapon states have to be held accountable for their nuclear-capable launchers as well At the time, I suggested keeping the old START count in place to do just that and it looks like the New START treaty will be able to do it to some extent.

As for the bombers, I'm not sure that Russia gained anything in particular there. We get better accountability for launchers, but leave quite a few warheads unaccountable. One can argue that Russia may be more worried about SLBMs than about bombers - it may well be the case. In any event, I don't think that the trick with bomber count weakens the treaty."
Posted by WINston smITh at 9:18 PM