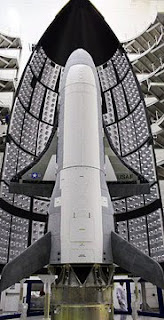 Our tax dollars at work. No out cry from the right regarding the latest welfare for the the rich which destabilizes world peace from the Timesonline:

"Somewhere above earth is America’s latest spaceship, a 30ft craft so classified that the Pentagon will not divulge its mission nor how much it cost to build.

The mysterious X37B, launched successfully by the US Air Force from Cape Canaveral on Thursday, using an Atlas V rocket, looks like a mini-Space Shuttle — but its mission is top secret.

It is officially described as an orbital test vehicle. However, one of its potential uses appears to be to launch a surge of small satellites during periods of high international tension. This would enable America to have eyes and ears orbiting above any potential troublespot in the world.

The X37B can stay in orbit for up to 270 days, whereas the Shuttle can last only 16 days. This will provide the US with the ability to carry out experiments for long periods, including the testing of new laser weapon systems. This would bring accusations that the launch of X37B, and a second vehicle planned for later this year, could lead to the militarisation of space.
"US defence officials, who would not say how much the project had cost, insisted, however, that it was “just an updated version of the Space Shuttle activities”.

Thursday’s launch was more about testing the craft, a new generation of silica tile and a wealth of other advances that make the Shuttle look like yesterday’s space technology.

Nasa’s X37B programme began in 1999 and ran until September 2004 when it was transferred to the Defence Advanced Research Projects Agency before being taken over by the US Air Force.

The flight of the X37B is being managed by the US Air Force Space Command’s 3rd Space Experimental Squadron.

“This bird has been through all of the shake, rattle and roll, the vibration tests, the acoustic tests that any spacecraft would go through,” said Gary Payton, Under Secretary of the Air Force for Space Programmes.

With all the focus on the launch of the secret X37B, another space launch by a Minotaur IV rocket from Vandenberg Air Force base in California received less attention.

It was carrying the prototype of a new weapon that can hit any target around the world in less than an hour.

The Prompt Global Strike is designed as the conventional weapon of the future. It could hit Osama bin Laden’s cave, an Iranian nuclear site or a North Korean missile with a huge conventional warhead."

Why shouldn't the rest of the world worry about us?
Posted by WINston smITh at 8:59 PM