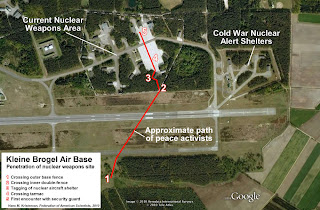 The Federation of American Scientists Strategic Security blog reports on a security breach earlier this month at a U.S. Air Force base and nuclear weapons facility at Kleine Brogel, Belgium:

"A group of people last week managed to penetrate deep onto Kleine Brogel Air Base in Belgium where the U.S. Air Force currently deploys 10-20 nuclear bombs...
The activists videotaped their entire walk across the base. The security personnel confiscated cameras, but the activists removed the memory card first and smuggled it out of the base. Ahem…

In June 2008, I disclosed how an internal Air Force investigation had concluded that most nuclear weapons sites in Europe did not meet US security requirements. The Dutch government denied there was a problem, and an investigative team later sent by the US congress concluded that the security was fine.

They might have to go back and check again.

The nuclear bombs at Kleine Brogel are part of a stockpile of about 200 nuclear weapons left in Europe after the Cold War ended. Whereas nuclear weapons have otherwise been withdrawn to the United States and consolidated, the bombs in Europe are scattered across 62 aircraft shelters at six bases in five European countries. The 130-person US 701st Munitions Support Squadron (MUNSS) is based at Kleine Brogel to protect and service the nuclear bombs and facilities.

The activists will likely be charged with trespassing a military base but they should actually get a medal for having exposed security problems at Kleine Brogel. And this follows two years of the Air Force creating new nuclear command structures and beefing up inspections and training to improve nuclear proficiency following the embarrassing incident at Minot Air Force Base in 2007. Despite that, the activists not only made their way deep into the nuclear base but also discovered that the double-fence around the nuclear storage area had a hole in it! “We’re not the first,” one of the activists said.

NATO needs to get over its obsession with nuclear weapons and move out of the Cold War and the Obama administration’s upcoming Nuclear Posture Review needs to bring those weapons home before the wrong people try to do what the peace activists did."

Posted by WINston smITh at 5:30 PM