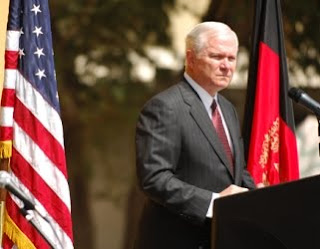 Robert Gates, former head of the George H.W. Bush Library, the C.I.A., and now the Department of Defense, decries the falling away of European support of America's never ending war on terror:

"Citing a "crisis" in the alliance, Gates said Afghanistan has exposed fundamental NATO weaknesses - shortcomings that he said can undermine the viability of NATO as it faces future security threats.

He cited a money shortage within NATO - a perennial problem that successive American administrations have tried and failed to fix. That, in turn, is a "symptom of deeper problems with the way NATO perceives threats," assesses its defense needs and sets spending priorities, Gates said.

Gates tempered his stern message with words of praise for NATO allies, saying they had demonstrated in just the last three months an "unparalleled level of commitment" to the war effort by increasing their troop contributions from 30,000 last summer to 50,000 this year.

"By any measure that is an extraordinary feat," he said. He did not mention, however, that even NATO members who have shared the combat burden in Afghanistan are finding it hard to sustain.

In the Netherlands, for example, the coalition government collapsed this month over the issue of troop contributions; the 2,000-strong Dutch troop contingent is to begin withdrawing in August. Another stalwart, Canada, plans to remove 2,800 troops by next year, even as some other nations send more."

Meanwhile NATOs historic task of pissing off the Russians continues:

"Responding to US Secretary of State Hillary Clinton’s assurances that Russia should not fear NATO’s advance, Russian ambassador to NATO Dmitry Rogozin wants more than words.

In a speech that outlined NATO's mission for the 21st Century, Hillary Clinton emphasized that the 28-member military organization presents no threat to Russia.

“While Russia faces challenges to its security, NATO is not among them,” the US Secretary of State told an audience assembled at a Washington hotel ballroom on Monday. “We want a cooperative NATO-Russia relationship that produces concrete results and draws NATO and Russia closer together.”


Clinton then said that the key to NATO-Russian relations is a high level of transparency in order to dispel Moscow’s fears that the alliance will one day turn on Russia.

Dmitry Rogozin, the tough-talking Russian ambassador to NATO, wasn’t buying a word of it.

“In my view, Mrs. Clinton's speech failed to answer the questions that Moscow has repeatedly raised with its US and NATO partners,” he told Interfax on Tuesday.

Rogozin then cited a long list of complaints aimed at NATO and its “spontaneous expansion eastwards.”

“We cannot be happy with these rules,” he said. “A unilateral world, NATO-centrism, the alliance's spontaneous expansion eastwards and refusal to recognize the principle of integrity and security.”

The failure “to take into account Russia's and its partners' interests… is a burp of the Cold War,” the ambassador said.

And Russia is not sitting by idly as NATO continues to encroach eastward. At a February 5 session of the Russian Security Council, President Dmitry Medvedev said he had approved Russia's updated military doctrine, which ranked NATO expansion as a major threat.

Russia’s new military doctrine mentions, amongst other threats, “the desire to invest the military potential of the North Atlantic Treaty Organization (NATO) with global functions, carried out in violation of international law, and advance the NATO member states’ military infrastructure closer to Russia’s border, particularly by expanding the bloc.”

But Russia had been making overtures to its partners that the European security architecture needs to be overhauled to reflect all of the parties’ interests.

In November 2009, Moscow made a push for the United States and Europe to embrace a new security structure on the European continent that would finally remove “stereotypical Cold War rationale” from NATO’s mission statement."

Why does this organization continue to exist?
Posted by WINston smITh at 8:31 PM

What a great resource!