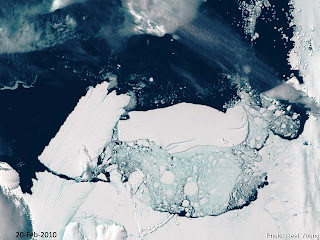 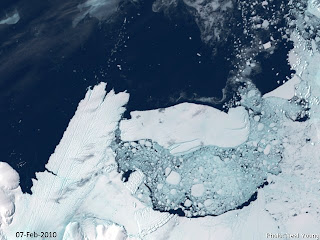 The Australian Antarctic Division reports on another large hunk of an Antarctic glacier breaking off in this case due to another huge iceberg striking it. According to the Guardian the piece the size of Luxembourg may have a significant impact on world ocean ecology:

"Rob Massom, a senior scientist at the Australian Antarctic Division and the Antarctic Climate and Ecosystems Cooperative Research Centre in Hobart, Tasmania, said the location of the icebergs could affect global ocean circulation and had important implications for marine biology in the region.

The concern is that the massive displacement of ice would transform the composition of sea water in the area and impair the normal circulation of cold, dense water that normally supplies deep ocean currents with oxygen.

"Removal of this tongue of floating ice would reduce the size of that area of open water, which would slow down the rate of salinity input into the ocean and it could slow down this rate of Antarctic bottom water formation," Massom told Reuters.

Mario Hoppema, chemical oceanographer at the Alfred Wegener Institute for Polar and Marine Research in Germany, said that as a result "there may be regions of the world's oceans that lose oxygen, and then of course most of the life there will die"."
Posted by WINston smITh at 8:44 PM