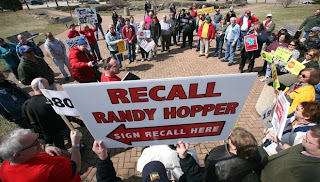 Randy Hopper, whose name alone is now a double entendre, is now on the recall chopping block.From the Milwaukee Journal Sentinel:

Organizers of the recall effort against state Sen. Randy Hopper (R-Fond du Lac) filed what they said were more than 22,500 signatures with the Government Accountability Board in Madison - making them the second campaign to claim enough signatures to force a recall election involving a GOP state senator."

While I could give a rip about his personal morality the fact that his wife and maid have both signed the recall petition is added spice since he took up with a 25 y/o female staffer in Madison. More republican family values on display from Fitzwalkerstan.
Posted by WINston smITh at 8:58 PM