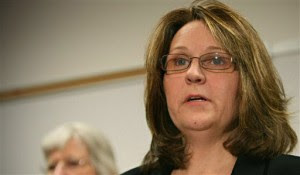 Supposedly David Prosser has pulled off a squeaker in what was to be a cake walk:

"A conservative state Supreme Court justice overcame efforts to tie him to Wisconsin's polarizing governor and survived a near-upset in a race that drew national attention after a fierce fight over union rights.

County tallies finalized Friday showed Justice David Prosser defeated little-known challenger JoAnne Kloppenburg by 7,316 votes. State election officials said they will wait to declare an official winner until the deadline for Kloppenburg to seek a recount passes. She has until Wednesday to call for one."

I say supposedly as an investigation into the suspicious activities of the Waukesha county clerk, Kathy Nickolaus, is in the offing:

"The state's investigation into vote irregularities in Waukesha County will stretch back at least five years, the head of the Government Accountability Board said Thursday.....
"Now questions have emerged over Nickolaus' published vote counts from as far back as the fall of 2006, when there were key statewide elections including races for governor and attorney general.
"This is part of what we're looking into. We have a lot of complaints," said Kevin Kennedy, the director and general counsel for GAB. "It's part of our investigation."

This woman is not an aberration but rather an example of the ongoing criminal conspiracy known as the Republican Party. A RICO indictment is more in order.
Posted by WINston smITh at 10:19 PM