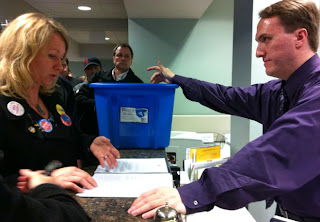 The Milwaukee Journal reports on the first of what will be many deliviries of signatures to the state's Governmental Accountability Board. The following are a few salient points from the article which I have taken the liberty of translating from the native obfusacatese to what it really means:

"Organizers of the recall campaign against state Sen. Dan Kapanke (R-La Crosse) delivered about 21,700 signatures Friday in an attempt to force Kapanke into a recall election - well beyond the 15,588 signatures required, and in half the time allotted to collect them."----That's a shitload of signatures from pissed off people rounded up in a short period of time.

"The filing of the signatures with the state Government Accountability Board was the first from the recall campaigns against 16 senators being waged around the state. And it suggested that Democrats seeking to unseat Republicans are better organized, or at least better coordinated, than those on the other side.

For example, recall efforts against the Republicans were all registered the same day and with the same treasurer, and organizers say they're shipping their signatures to Madison as they collect them."-------In an unusual move the Democrats, or rather people who support the Democrats for lack of anything better, are highly organized on this project.

"By contrast, Kim Simac, the Eagle River tea party activist running the recall campaign against Sen. Jim Holperin (D-Conover), says petitions and envelopes are piled up on her kitchen table.

"It's a mess," she says. "I'll be glad to get my life back when this is over" - though she also said she's confident her organization will get enough signatures to force a recall election against Holperin.

"It's a top-down effort on the Democratic side," Johnson said."-----the Republicans don't have a fucking clue what they've stirred up let alone what to do about it. It also begs the question of what constitutes grass roots coming from artificial plants.

"Kapanke couldn't be reached for comment Friday, but Bill Feehan, chairman of the La Crosse County Republican Party, said the announcement that the goal was reached was "not a big surprise."-----Locked in a closet and crying.

"Kapanke was identified by several political scientists recently as the most vulnerable of the 16 senators targeted for recall, because of the relatively strong performance of Democrats in his district in the past two statewide elections."----Likely to be locked in the closet and disconsolate for sometime to come.
Posted by WINston smITh at 9:11 AM