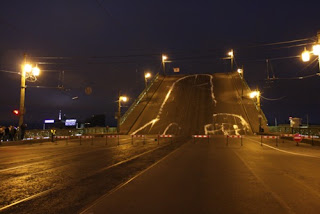 This was too good to pass up. Russian political/artistic expression is always in a class by itself. The group's website is here. H/T to Mark at Norwegianity. More background:

"SAINT PETERSBURG — The artists have overturned police cars on one of Russia's most famous squares with dozing officers inside and painted a giant penis on a drawbridge in front of the ex-KGB headquarters.

In a radical group called Voina, or War, they have exploded any notion that Russia's modern art scene is dry or conservative. But their provocative installations have also left them exposed to legal action.

The Saint Petersburg-based group's name means that "we have declared war on triviality and injustice," said artist Oleg Vorotnikov, 32, a philosophy graduate from Moscow State University.

He and another member, Leonid Nikolayev, 27, were recently freed on bail after spending three months in pre-trial detention as police investigate last September's car-tipping performance.

In a single night they turned over three police cars -- with sleeping policemen inside -- in the centre of the city to protest against police abuses of power and corruption."
Posted by WINston smITh at 10:18 PM