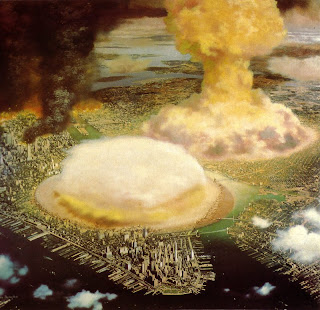 The Obama administration faces a monumental decision regarding nuclear strategy that has largely gone un-noticed in popular media. Having backed away from conplan 8022, developed under the Bush-Cheney administration which, among other things , called for pre-emptive strikes against potential threats as well as real ones, the Obama administration must come to grips with the desire to make the world safer and satisfy the American military-industrial complex. FAS goes into more details:

"While the completion of the Obama administration’s Nuclear Posture Review continues to slide, FAS today published an issue paper on how a decision to reduce the role of nuclear weapons might influence the U.S. strategic war plan.

President Obama pledged in his Prague speech last year that he would “reduce the role of nuclear weapons” to “put an end to Cold War thinking,” and reaffirmed earlier this month that the “Nuclear Posture Review will reduce [the] role….”

How to reduce the role in a way that is seen as significant by the global nonproliferation community, visible to adversaries, and compatible with the president’s other pledge to “maintain a safe, secure and effective arsenal to deter any adversary…as long as these weapons exist” apparently is the subject of a heated debate within the administration.
Click image to download report.

The most persistent rumor is that the review might remove a requirement to plan nuclear strikes against chemical and biological weapons; reduce the mission to the core role of deterring use of other nuclear weapons. I recently described that the Quadrennial Defense Review stated that new regional deterrence architectures and non-nuclear capabilities “make possible a reduced role for nuclear weapons in our national security strategy.”

A reduction of the mission to only deter nuclear use would roll back much of the expansion of nuclear doctrine that happened during the Clinton and Bush administrations. But it would not “put an end to Cold War thinking,” but to post-Cold War thinking.

To put an end to Cold War thinking, the reduced role would have to affect the core of the war plan that is directed against Russia and China.

The issue paper describes how the strategic war plan is structured, how it has evolved, and discusses options for reducing the mission and the war plan itself."

Meanwhile Pavel Podvig reports on the Russian equivalent which seems to pull back from looser use of nukes:

"On February 5, 2010 President of Russia formally approved the new military doctrine, whose text is now available, and a document called "Basic principles of state's policy in the area of nuclear deterrence through 2020", which appears to be classified.

Nikolay Sokov, who has been following the Russian doctrinal debate closely, has a detailed analysis. The key point, however, is that despite the earlier signs that the doctrine would expand the use of nuclear weapons and even allow for preventive and preemptive strikes, the final document is quite reasonable. As far as nuclear weapons are concerned, the key statement of the new doctrine is that

Russia reserves the right to use nuclear weapons in response to a use of nuclear or other weapons of mass destruction against her and (or) her allies, and in a case of an aggression against her with conventional weapons that would put in danger the very existence of the state.

This is, actually, not bad, since the scope of the use of nuclear weapons is quite limited. For example, a limited conventional aggression against Russia would not trigger a nuclear response. Neither would a "regime change" in an allied country, as long as it doesn't cross the nuclear threshold.

Of course, it is a declaratory policy and one can argue that things may change in a heat of a crisis. This is true, but the doctrine sets a baseline, which says that Russia is quite restrained in setting goals for its nuclear forces."
Posted by WINston smITh at 9:39 PM