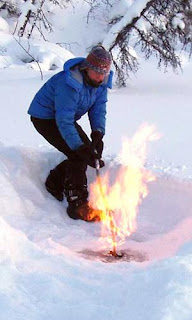 In the past week further evidence of the decline of the American economy and climate change combine in an unhearlded and unheard of fashion. Elizabeth Warren, a genuine American heroine, describes how the coming collapse of the commercial real estate market imperils thousands of small American banks and hundreds of billions of dollars. In the world of natural science further concern mounts over arctic methane destabilization. The photo depicts a guy igniting a Siberian permafrost methane vent.

The Atlantic reports on the potential fallout of Siberian methane:

"Unexpectedly huge quantities of Siberian methane are being released into the atmosphere, according to a new study. The resulting feedback loop could dramatically outpace the climate models that scientists and policy makers have been using as they attempt to roll back emissions.

When it comes to climate change, methane is bad news: It is 30 times more potent than carbon dioxide in causing increased atmospheric temperatures.

A National Science Foundation study in today's issue of Science found that melting permafrost in the East Siberian Arctic Shelf is causing an annual release of nearly 8 million tons of methane. In deeper ocean areas, methane that escapes from the seabed has time to oxidize as it rises to the surface, transforming into less potent carbon dioxide by the time it is released into the atmosphere. In the shallow waters of East Siberia, however, methane that escapes through the thawing permafrost rises quickly to the surface and enters the atmosphere in its original form.

Eight million tons is a relative a pittance compared to the 80 million metric tons produced by livestock around the world each year. But the Siberian methane problem will only get worse as temperatures increase and more permafrost melts.

Joe Romm at Climate Progress describes this methane release as "the most dangerous amplifying feedback in the entire carbon cycle." According to the NSF, "the Earth's geologic record indicates that atmospheric concentrations of methane have varied from about 0.3 to 0.4 parts per million during cold periods to about 0.6 to 0.7 parts per million during warm periods." Today's study pegs methane levels in the Arctic at 2.85 parts per million, the highest concentration in 400,000 years, so the methane feedback loop is already well under way.

Perhaps the scariest part of these findings is that they are not included in climate models. According to Romm, "no climate model currently incorporates the amplifying feedback from methane released by a defrosting tundra." The methane findings from the East Siberian shelf are a dangerous new variable that must be incorporated into planning and policy making. "
Posted by WINston smITh at 8:49 PM