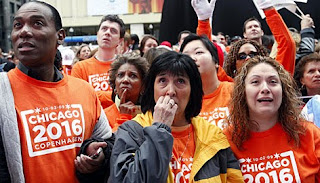 The recent decision by the IOC to bypass Chicago for the 2016 Olympics has generated all kinds of reaction including predictable right-wing Obama bashing as reported at TPM and somewhat reluctant acceptance that world has changed and they just don't like the USA that much.

Daily Kos reports on a less discussed possbilty, namely that just getting into the USA is as about as easy and visitor friendly as entering the Soviet Union at the height of the Cold War:

" So when did wingnuts start cheering against America? Their unbridled joy at losing out to Brazil is a bit unseemly, isn't it? "America, fuck yeah!" has become "Fuck America, Yeah!"

While Chicago likely lost mostly because the country has hosted plenty of Olympics and South America never has, and because of lingering anti-American sentiment, this certainly didn't help:

"However, the triumphant Chicago presentation--the culmination of a $48 million package--had cold water thrown onto it when Pakistani IOC member Syed Shahid Ali correctly noted the significant difficulties facing foreigners seeking entry into the United States. Obama failed to address Ali's concerns, saying only that hosting the Games in Chicago would be "a reminder that America at its best is open to the world."

America's visa processing issues have been well-publicized throughout much of the world, with some tourists waiting six months or more to have a 10 minute appointment with a visa examiner in an embassy or consulate to visit America on a vacation. Business visas or those for cultural ambassadors, like artists and athletes, are similarly problematic. Many applicants complain that the system is opaque at best and a crap shoot at worst, with few guidelines provided for applicants and rejections issued pro forma.

The Wall Street Journal speculates that Chicago's loss stems has more to do with the heavy European membership at the IOC and Latin American IOC members lining up behind Rio; however, the visa issue has been an growing problem since new requirements were issued after 9/11. Perhaps the Chicago loss will provide some much-needed political impetus to finally spur legitimate discussions of political reform."

You create a fortress America to keep people out, they won't go out of their way fighting to bring international events inside your fortifications.


I hear wingnuts are agitating against America hosting the next Super Bowl.

Remember when liberals celebrated New York City losing out on the 2012 Olympics? You don't? "

While the world is generally supportive of Obama's goals enunciated during the election, they, like the majority of American population, are awaiting tangible proof of real change. The American wingnuts in their gloating will be seen as doing their best to accelerate the American race to the bottom.
Posted by WINston smITh at 5:10 PM