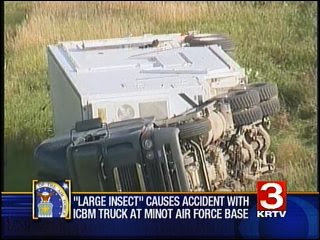 The Minot AFB in North Dakota which has had more than its fair share of "unusual incidents" involving nuclear weapons has had the wing commander relieved of duty after yet more bizzare incidents:

"The U.S. Air Force yesterday removed an officer from his post as missile wing commander at Minot Air Force Base in North Dakota following a string of weapons mishaps at the site, the Associated Press reported (see GSN, Aug. 19)....
"Col. Christopher Ayres led the 91st Missile Wing, which manages 150 Minuteman 3 nuclear missiles deployed in silos around the state.

Ayres was not held directly responsible for any of the incidents, which included three missile personnel dozing off last year while in possession of ballistic missile launch codes (see GSN, July 15). In another incident, a truck turned over while carrying a Minuteman 3 ballistic missile rocket booster near the base. In addition, a Minot service member has been charged with taking a missile launch controller, reportedly as a memento (see GSN, Aug. 1, 2008)."

The truck accident was caused by a large unidentified insect:

"An Air Force report blames an insect for a vehicle accident involving personnel from a nuclear missile base in Minot, North Dakota.

The accident happened back in August in North Dakota.

A truck driver lost control of a semi-trailer carrying missile parts from Minot Air Force Base.

The reports says the driver was distracted by a "large insect" that flew in a window and landed on the driver's back.

The truck overturned on a gravel road and was carrying rocket engine parts for the missile - but no nuclear material.

No word on the cost of the cleanup or the type of bug."
Posted by WINston smITh at 9:58 PM

w0w. How do you get unemployment benefits after something like that?

Bill,
Unfortunately you never are "unemployed".