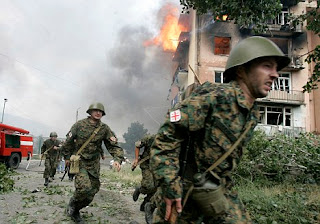 The EU report on the short-lived war between Georgia, South Ossetia, and Russia has been released and while accusing the Russians of disproportionate response clearly lays the blame at the door of Georgia and the government of Saakashvili. Here are a few exerpts:

"An investigation into last year's Russia-Georgia war delivered a damning indictment of President Mikheil Saakashvili today, accusing Tbilisi of launching an indiscriminate artillery barrage on the city of Tskhinvali that started the war.......The EU-commissioned report, by a fact-finding mission of more than 20 political, military, human rights and international law experts led by the Swiss diplomat, Heidi Tagliavini, was unveiled in Brussels today after nine months of work.

"There is no way to assign overall responsibility for the conflict to one side alone," the report found.

But the conclusions will discomfit the western-backed Georgian leader, Saakashvili, who was found to have started the war with the attack on Tskhinvali, the South Ossetian capital, on the night of 7 August last year, through a "penchant for acting in the heat of the moment".

The war started "with a massive Georgian artillery attack", the report said, citing an order from Saakashvili that the offensive was aimed at halting Russian military units moving into South Ossetia.

Flatly dismissing Saakashvili's version, the report said: "There was no ongoing armed attack by Russia before the start of the Georgian operation ... Georgian claims of a large-scale presence of Russian armed forces in South Ossetia prior to the Georgian offensive could not be substantiated ... It could also not be verified that Russia was on the verge of such a major attack."

The conflict became somewhat of an issue in last year's presidential election especially after it was learned that McCains top foreign policy advisor was recieving hundreds of thousands of dollars from the Georgian government.
Posted by WINston smITh at 9:32 PM