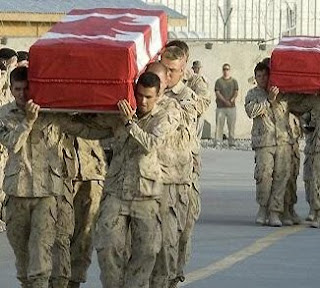 From the Globe and Mail:

"More than five years after taking charge of security in one of the most violent regions in Afghanistan, Canadian troops wrapped up their final combat operation with a two-week sweep through a rural swath of Kandahar that was undisputed Taliban territory just a year ago.

The offensive, conducted with a bulked-up Afghan National Army brigade in the lead, marks Canada’s last days in the long and deadly war. All combat troops are set to withdraw this summer, 5½ years after the mission in Kandahar began."

And from the Waterloo Record:

"Ten years ago, Canada and other countries involved in the invasion of Afghanistan talked of bringing stability and peace to that famously distressed country. Instead, we succeeded only in exporting Afghanistan’s instability across the border into nuclear-armed Pakistan, which now faces its own fundamentalist insurgencies.

Ten years ago, we talked — as the Russians did during their abortive occupation — of helping Afghan women and girls.

Like the Russians, we probably did help some. But like the Russians (or Soviets, as they were known in those days) we have been unable to transform a culture that is fundamentally misogynist into one more to our liking."

Even a hopeless dork like Harper gets it. When will we?
Posted by WINston smITh at 9:51 PM