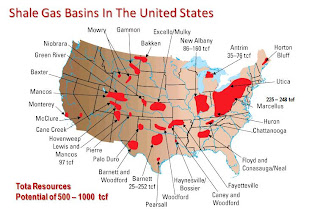 No doubt everyone has been exposed to the wondrous claims of the large oil companies concerning the virtues of shale gas. This, we are told, will be the salvation of America if we would just chill out and let the oil companies work their magic. This is in spite of the doubts regarding a key feature of this industry namely hydraulic fracturing or "fracking". Now a Canadian energy expert has published a report that brings into question many of the economic and geologic assumptions that the public has been fed on this topic:

"The first says that the shale gas revolution will miraculously create 100 years worth of methane; the second chorus maintains that the price of natural gas, a volatile commodity, will stay low for decades; and the last chorus says that natural gas will green the economy and arrest climate change. Hallelujah.

But a new report by J. David Hughes, one of North America's foremost coal and gas experts, challenges every single one of these faith-based assumptions with hard science and clear-eyed math. In the stunningly lucid 64-page report for the Post Carbon Institute, Hughes squarely concludes that all three assumptions are highly questionable, if not total "impossibilities."

"Hughes is no wide-eyed greenie or industry basher. He happens to be one of Canada's most credible energy scientists. The geologist worked for Natural Resources Canada for 32 years and mapped Canada's coal and coal bed methane fields. He has also served on Canada's Natural Gas Potential Committee and is regarded as one of the continent's top global energy analysts. (B.C. politicians take note: Hughes lives on Cortes Island on the West Coast.)"

Here are some of Mr Hughes' more salient points:

"For starters, industry hubris simply defies the law of thermodynamics. From 1990 levels, U.S. gas drilling tripled to 33,000 wells per year between 2006 and 2008 before collapsing back to 20,000 wells. In order to build a modest 21 per cent increase in natural gas production, the gas industry constructed a complex infrastructure nearly 100 per cent larger than what previously existed in 1990.

"What matters are flow rates and how fast the gas can be produced," explains Hughes. "There may be 100 years worth of methane in the ground, but it may take 800 years to produce it." Meanwhile, conventional gas production in both Canada and the U.S. is declining rapidly. In other words, shale gas might temporarily replace some of the air leaving the conventional gas tire -- but not for long.

"Next come the resource's extreme economics. A shale gas well with multiple fracks costs between $2 million and $10 million to drill. But unlike a conventional well, which declines between 25 and 40 per cent in its first year of production, a shale gas well drops like lead from 63 to 85 per cent. So, an initial whale of a return bought by fracturing an industrial scale land base (and watershed) abruptly becomes a sardine in short order.

Due to the high amount of capital, energy and water needed to frack a formation at high pressure, shale gas is expensive and is only economic in the best portions of today's shale plays. But due to over-drilling and the recession reducing demand, the actual market price has sunk to below the cost of production in many areas.

""One thing is certain," adds Hughes. "Shale gas is expensive gas, much of which is marginally economic to non-economic at today's gas prices. The resource will require unprecedented rates of drilling to grow production, and we will need higher prices to justify that. We'll have to carpet bomb landscapes in Pennsylvania and New York with rigs and gas production infrastructure -- those folks haven't seen anything yet."

Last but not least, Hughes demolishes the claim that shale gas is green. For years, scientists generally assumed that the burning of natural gas produces 44 per cent fewer greenhouse gas pollutants than coal. But that's no longer true.

A recent study based on U.S. Environmental Protection Agency data, for example, found that the cleaner-than-coal claim fell to 25 per cent or less when scientists included methane leaks or "fugitive emissions" from wells and pipelines.

Two Cornell University studies went even further. After accounting for methane vents and leaks over the lifetime of a gas well, (and methane is a much more powerful climate changer than CO2 over the first few decades), these studies found that shale gas has few or no climate change benefits.

According to Hughes' analysis, shale gas repeatedly comes out a loser compared to dirty old coal for power generation over the next half century."

Quite frankly Americans are desperate for anything that might promise jobs or gas or both and the oil companies know this. Meanwhile as Dave Cohen points out at his excellent blog, Decline of The Empire, witless politicians stir up the clueless populace with promises of gushers to come:

"Run, Sarah, Run! With Ms. Palin in the Oval Office, there would be no doubt whatsoever that America is a joke. For every person on Earth outside the 50 states, America's fall from grace would become too obvious to ignore. Just imagine the fruitful consequences. For example, the only way to expose the futility of "Drill, Baby, Drill" is to drill, baby, drill. With no new oil forthcoming from those allegedly bountiful reserves in Alaska and unexplored parts of the outer continental shelf, it might occur to Americans that using less oil—for real!—is the only true path to salvation. And that's just one example. The possibilities are endless."
Posted by WINston smITh at 11:57 AM