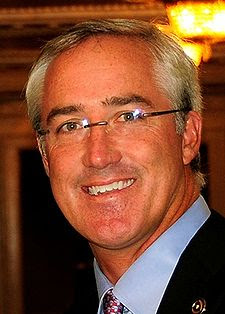 Republicans will need to gird themselves for increased scrutiny as the saga of Randy Hopper amply demonstrates. According to the Raw Story:

"Protesters who marched at the home of Wisconsin state senator Randy Hopper (R-Fond du Lac) were met with something of a surprise on Saturday. Mrs. Hopper appeared at the door and informed them that Sen. Hopper was no longer in residence at this address, but now lives in Madison, WI with his 25-year-old mistress.

Blogging Blue reports that the conservative Republican's much-younger new flame is currently employed as a lobbyist for right-wing advocacy group Persuasion Partners, Inc., but was previously a state senate staffer who worked on the Senate Economic Development Committee alongside Mr. Hopper. Her bio has been scrubbed from the Persuasion Partners' website, but a screen-grab is available here.

Sen. Hopper has worked closely with Wisconsin Governor Scott Walker to implement the state's new anti-labor laws and enact policies favorable to the interests of big business. Like Walker, Hopper is one of the Republican politicians named in a massive recall effort spearheaded by Wisconsin Democrats.

According to Wisconsin law, state elected officials who have served at least one year of their current term are eligible for recall by voters. Hopper was elected state senator for district 18 in the fall of 2008, making him eligible for recall, whereas Governor Walker will not be eligible until 2012.

Blogging Blue also reports that Mrs. Hopper intends to sign the recall petition against her husband. The petition has already been signed by the family's maid."

Gah.....our foes are many things, but retarded?

I suppose I'm just overly sensitive, but I hate when that word is casually tossed about.

I agree this wasn't the best choice and have made an editorial revision.