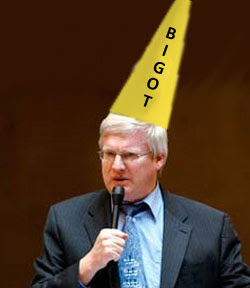 I have the feeling that we will be seeing more stories of Wisconsin republican strangeness and Glenn Grothman, one of the strangest, weighs in with this one courtesy of the Madison Police:

"Tuesday afternoon, several Madison Police officers were monitoring a crowd of around 100 protesting outside of the M&I Bank, 1 W. Main St., when Sen. Glenn Grothman approached. Demonstrators allowed Sen. Grothman to pass, but some were verbally abusive to the lawmaker. When Sen. Grothman exited the bank, he was also subjected to angry words, but as he walked away a man hugged Sen. Grothman. An officer reported that Grothman did not appear to enjoy the embrace, and was able to squirm away. The officer came up to the man and told him it is not okay to put hands on people who do not wish contact. The man told the officer he had no idea who Sen. Gorthman was, but that he hugged him because,” I loved him." He added that he loves "everyone," and that he decided to hug Grothman because he was wearing a suit, like the one the man used to wear when he worked in insurance. The man told the officer that he is the "peace walker,” that he had trekked here from Las Vegas, and that he is considering running for president. He also asked the officer if he knew "Snoop Dog." The officer said he did not, and again told the man not to touch people who do not want to be touched."

This may be the only love he gets on the streets of Madison that he can expect for some time to come.
Posted by WINston smITh at 9:02 PM