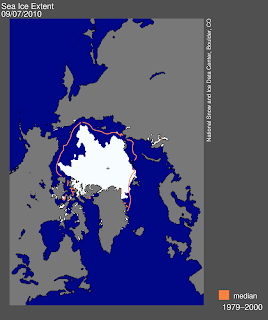 It appears that this years Arctic ice melt will be only 2nd to the record set in 2007 and continues a trend of decreasing sea ice for the last couple of decades. The National Snow and Ice Data Center provides further info:

The Northwest Passage and the Northern Sea Route are largely free of ice, allowing the potential for a circumnavigation of the Arctic Ocean. At least two expeditions are attempting this feat, the Norwegian explorer Borge Ousland and the Peter I yacht from Russia."

As pointed out at NPR (of all places) these anti-climate change (republicans) people are fact impervious on a large number of issues.
Posted by WINston smITh at 9:50 PM