Militarism and the End of America 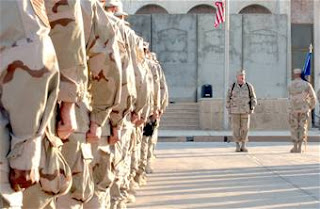 Recently I was flying on a domestic U.S. airline and at the end of the flight the stewardess exhorted passengers to thank members of the armed forces for their service. While this might seem innocuous to most it was to me another example of creeping militarism that has been seeping into American life for the last nine years. With the recent economic collapse it becomes even more obvious that the military is the only option for an increasingly large number of Americans, especially the youth. The ugly reality is that for many the military is the only employment option. More to the point, for a nation which is increasingly financially, morally, and intellectually bankrupt, military force is the only thing in its favor. When the only tool we have is a hammer every problem is a nail.
Posted by WINston smITh at 9:35 PM

Wow, you are very right! You said it loud and clear! People are not telling scholars and innovators thank you for all you do, I wouldn;t even know one if I saw one on the street or an airplane, I miss ( I never saw) the people that walked in the streets together, got all together to march for change, I don't know if anything changed but it was nice to know that at one time everyone wanted change. Young adults volunteering for army when in some country you have to, people came here like my father from Ukraine with his brother not to be in the army, not to leave your family to fight someone's ideology and whatever else. I like your page, it really inspired me to write to you =) Life is beautiful, have a great day!

Thank you. Quite frankly when there is only one option there is actually no option. A huge wake up is in order but it may be awhile in coming.