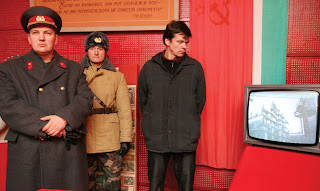 Jack Womack, in his amazing 1990s satire of Russian life "Let's Put The Future Behind Us",has his characters envisioning an improbable theme park,"Sovietland".

There the "Only souvenirs will be terrible Soviet Union products and tourist staff will be surly and unpleasant, great specialists in non obtrusive service."

Sovietland has become a reality in....Lithuania. According to Vice Magazine 1984:Isvgyvenimo Drama has opened up 15 miles outside of Vilnius. Here's more:

"So these nuts in Lithuania have opened up a new theme park called 1984: Isvgyvenimo Drama. The basic premise is that you, dear customer, are a freshly caught Russian political dissident and now you are going to be locked up in hell and then interrogated by monstrous communists. Six Flags? Who needs it?

The fun begins about 15 miles away from the Lithuanian capital of Vilnius where an abandoned bunker in the middle of the woods has been transformed into the most fun you can have this side of the Gulag Archipelago. You’ll be questioned by a KGB agent, visit the infirmary (whether you need to or not), and learn the Soviet anthem under shrieked threats of a smack in the face. You’ll also watch the TV programs that were broadcast back in the day and eat typical Soviet food on some quality Soviet tableware. And if you don’t carry out all the orders you receive, you will immediately be kicked out with no refund. Sorry comrade, but them’s the rules."
Posted by WINston smITh at 9:32 AM