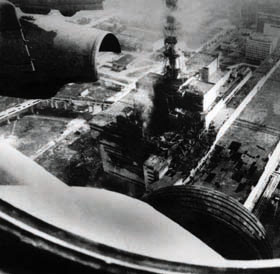 The similarities between Chernobyl and Petronobyl grow everyday. In this case corporation trys to evade responsibility as much as the Soviet state did in the past.McClatchy spills on the spill:

"BP, the company in charge of the rig that exploded last month in the Gulf of Mexico, hasn't publicly divulged the results of tests on the extent of workers' exposure to evaporating oil or from the burning of crude over the gulf, even though researchers say that data is crucial in determining whether the conditions are safe.

Moreover, the company isn't monitoring the extent of the spill and only reluctantly released videos of the spill site that could give scientists a clue to the amount of the oil in gulf.


Under pressure from senators, BP released four videos Tuesday, but it hasn't agreed to better monitoring.

The company also hasn't publicly released air sampling for oil spill workers although Occupational Safety and Health Administration, the agency in charge of monitoring compliance with worker safety regulations, is relying on the information and has urged it to do so.

"It is not ours to publish," said Dean Wingo, OSHA's assistant regional administrator who oversees Louisiana. "We are working with (BP) and encouraging them to post the data so that it is publicly available."

Much of the worker exposure data is being collected by contractors hired by BP.

Toby Odone, a BP spokesman, said the company is sharing the data with "legitimate interested parties," which include government agencies and the private companies assisting in the cleanup. When asked whether the information can be released publicly, he responded, "Why would one do it? Any parties with a legitimate interest can have access to it."

Joseph T. Hughes Jr., the director of the worker education training program for the National Institute of Environmental Health Sciences, said he didn't think "anyone has seen much of that data at all."

"The hard part about it is that in a normal response, when the government is doing this, there might be more transparency on the data," Hughes said. "In this case, when you have BP making the decisions and collecting the data it's harder to have that transparency."

Unlike the response to other past national disasters such as Hurricane Katrina where the government was in charge, BP has been designated as the "responsible party" under federal law and is overseeing much of the response to the spill. The government is acting more as an adviser.

So far, the government has been slow to press BP to release its data and permit others to evaluate the extent of the crisis.

"I think that one of the lessons learned here is whether the federal government should have more of a role in the response and not leave that decision-making in the hands of the responsible parties," said Hughes, whose institute was one of the first to raise questions about air quality at the World Trade Center site in the wake of the Sept. 11 attacks.

A recent report in the New England Journal of Medicine found that many Sept. 11 rescue workers still suffer from impaired lung function.

The Center for Toxicology and Environmental Health, one of BP's consultants, is collecting air quality samples over the coast and the water.

"It's fair to say that a majority of the air monitoring along the shoreline is being done by our organization," said Glenn Millner, a partner with the CTEH and a principal toxicologist.

Gina Solomon, a medical doctor and a senior scientist with the Natural Resources Defense Council, said her environmental organization has been pressing the government to release the data, after hearing reports of fishermen concerned about exposure.

"The fact that OSHA is saying that it's safe is important because they have access to data that we don't have," she said. "It's sort of awkward to have to take that on face value given the fact that there are fishermen who feel they are getting sick."

The Environmental Protection Agency is releasing shoreline data on its website, but not information about the air quality workers encounter on the water.

OSHA has access to that data and is monitoring it to determine what type of equipment the workers should be issued and other questions related to worker safety. So far, the air quality does not require workers to receive respirators, Wingo said.

Millner said that data as a matter of practice is shared only with the oil clean up worker and the company overseeing the cleanup.

BP also has exercised considerable control over how much is known about the amount of oil gushing into the gulf.

Early on, the government estimated that 210,000 gallons was being released daily. That estimate was based on satellite observations of the water's surface.

The first look at the oil coming out of the pipe on the sea floor was a video clip that BP released last week in response to demands from reporters and others. It caused a stir because some experts who analyzed it estimated that the amount of oil pouring into the gulf was many times the government's official estimate.

BP provided clips from several days of the spill on Tuesday.

The clips, however, would still result only in rough estimates because the oil flows at different rates at different times and it's mixed with gas, said BP spokesman Mark Proegler.

The company had no other equipment on the sea floor to monitor the amount of the flow, and no plans to install any.

"We've said from the beginning . . . it's difficult if not impossible to measure from the source of the flow," Proegler said on Tuesday. BP's focus is stopping the flow and keeping the oil away from shore, he said.

Jeff Short, an oil pollution expert and former National Marine Fisheries Service official who now works for the environmental group Oceana, said the estimate based on surface observations was very imprecise, and that looking at the flow rate from the pipe would be better.

"The public has the right to see what harm the environment is exposed to, and knowing the flow rate is fundamental to that," he said.

Judy McDowell, the chair of the biology department and a senior scientist at the Woods Hole Oceanographic Institution in Massachusetts who's studied many oil spills, said that in addition to knowing the amount of oil flowing in, scientists also need to figure out how it's dispersing and breaking down in order to know what effect it would have on living organisms in the water.

Some university researchers have been frustrated by the lack of data and the refusal of federal agencies to press BP to collect detailed measurements from the broken well pipe or fully assess what might be happening underwater.

"We have been screaming from day one for data,'' said Peter Ortner, a fisheries biologist at the University of Miami.

Ortner also said that NOAA had been slow to consider sub-surface effects and didn't deploy the sophisticated gear that might help surveying for submerged oil.

Lubchenco said Monday that the agency had been discussing ideas about more sensing gear on the ocean floor but said "the priority at this point is to stop the flow.''

Meanwhile, an analysis of satellite imagery by the University of Miami's Rosenstiel School of Marine and Atmospheric Science, reported Tuesday that the spill has grown to more than 7,500 square miles, or about the size of New Jersey.

*HT to Mark at Norwegianity for a great new descriptor.