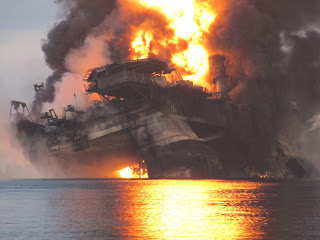 The disaster in the Gulf of Mexico continues to grow to apocalyptic proportions. This is beginning to resemble the petroleum equivalent of Chernobyl. mi2g gives some of the horrific details:

"President Obama is flying out to the Gulf of Mexico coast as the emergency grows post the "Deepwater Horizon" catastrophe. The problem with the dirty "black gold" oil spill is that it is not a spill: it is an abundant flow, like an underwater oil volcano. A hot column of oil and gas is continuously jetting into freezing dark waters 5,000 feet below, where the pressure nears 2,200 pounds per square inch, making it extremely difficult to send down divers to carry out repairs manually. Experts are now calling it a continuous, 24/7 round-the-clock calamity. Unlike a leaking oil tanker, this emergency situation's source will not empty itself in hours or days. As a result, the "black gold" slick is spreading towards the four US states of Louisiana, Alabama, Mississippi and Florida, that have all declared a state of emergency....

"Poseidon, the God of the Sea, is clearly upset. The slick has tripled in size in a day and now covers nearly 4,000 square miles, an area the size of a small country. That suggests the oil has started spilling from the well more quickly. 5,000 barrels or 200,000 gallons of oil are gushing into the ocean every single day since the explosion on April 20th killed 11 men. This threatens all marine life in the surrounding area, wildlife in the marshlands, and the entire fragile and interlinked environmental web. The ruptured well, located in ocean water nearly a mile deep, has churned out an estimated 2 million gallons of oil to date into the Gulf. Some experts studying satellite images suggest that the figure is four to five times higher than that already. With no immediate solution to the leak available, it is possible that the oil well could keep churning out the same amount of oil or more for a few months yet. The commandant of the US Coast Guard, Admiral Thad Allen, has said it's impossible to give an exact estimate of how much oil is leaking. He has now been officially designated national incident commander for the uncontrolled oil release accident and reports directly to the US president, and the secretaries of Homeland Security and Defense."
Posted by WINston smITh at 9:34 PM