Gaza: What's An American to Do? 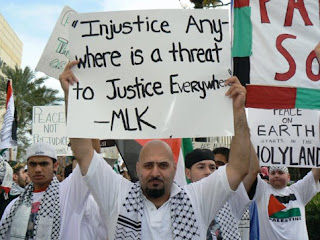 I for one have watched the developments in Gaza with a horrible sick feeling that my tax dollars are being used in a cynical episode of murder and ethnic genocide. It's time to turn off the tap. It's time to put the Israeli nation on notice that we regard them with the same loathing as Aparthied South Africa, China in Tibet, the Burmese military and numerous other international scum.
As a start it's time to use and fund The Real News, and Electronic Intifada for untainted news.

Another worthwhile group is The Palestinian Children's Relief Fund, donate, it's the very least we can do to counteract the evil being done in our name.

If you have Israeli business, professional, or educational links it's time to rethink the moral reprecussions. Sure there are enlightened Israelis but it's time to tell them that the deal is off until land theft, genocide, and racism is expunged from their land.

Posted by WINston smITh at 9:32 PM

Thanks Mark
We both have an idea that the real deficit in our world is Justice. Any remotely conscious person can figure this out.Shiites,Sunnis, Congolese river delta dwellers, and the poor throughout the world know.