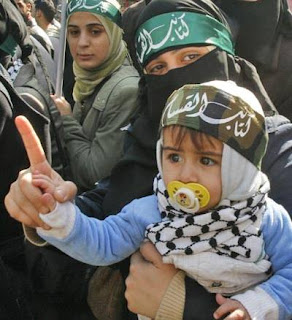 Amid the carnage unleashed upon Gaza for making the mistake of democratically electcing a government that neither Israel or the U.S. wanted are a few uncomfortable facts. Among these are the genesis of Hamas as a group initially supported by Israel to upset the PLO movement.
Justin Raimondo gives a comprehensive history:

"Begin and his successor, Yitzhak Shamir, launched an effort to undercut the PLO, creating the so-called Village Leagues, composed of local councils of handpicked Palestinians who were willing to collaborate with Israel – and, in return, were put on the Israeli payroll. Sheik Yassin and his followers soon became a force within the Village Leagues. This tactical alliance between Yassin and the Israelis was based on a shared antipathy to the militantly secular and leftist PLO: the Israelis allowed Yassin's group to publish a newspaper and set up an extensive network of charitable organizations, which collected funds not only from the Israelis but also from Arab states opposed to Arafat.

Ami Isseroff, writing on MideastWeb, shows how the Israelis deliberately promoted the Islamists of the future Hamas by helping them turn the Islamic University of Gaza into a base from which the group recruited activists – and the suicide bombers of tomorrow. As the only higher-education facility in the Gaza strip, and the only such institution open to Palestinians since Anwar Sadat closed Egyptian colleges to them, IUG contained within its grounds the seeds of the future Palestinian state. When a conflict arose over religious issues, however, the Israeli authorities sided with the Islamists against the secularists of the Fatah-PLO mainstream. As Isseroff relates, the Islamists

"Encouraged Israeli authorities to dismiss their opponents in the committee in February of 1981, resulting in subsequent Islamisation of IUG policy and staff (including the obligation on women to wear the hijab and thobe and separate entrances for men and women), and enforced by violence and ostracization of dissenters. Tacit complicity from both university and Israeli authorities allowed Mujama to keep a weapons cache to use against secularists. By the mid 1980s, it was the largest university in occupied territories with 4,500 students, and student elections were won handily by Mujama."

Again, the motive was to offset Arafat's influence and divide the Palestinians. In the short term, this may have worked to some extent; in the longer term, however, it backfired badly – as demonstrated by the results of the recent Palestinian election.

The Hamas infrastructure of mosques, clinics, kindergartens, and other educational institutions flourished not only because they were lavishly funded, but also due to being efficiently run. Sheik Yassin and the future leaders of Hamas acquired a reputation for "clean" governance and good administrative practices, which would greatly aid them – especially in comparison to the PLO, which was widely perceived as corrupt. Indeed, "clean government" – and not the necessity of armed struggle – was the main theme of their successful election campaign."

Americans of course don't distinguish much between Sunnis (Hamas) and Shiites (Hezbollah), and thus we see Americans and Israelis trying to make the case that the problem is provoked by Iran which makes no sense at all. Israel of course is more than happy to take advantage of this and we suffer and the world suffers.As an American taxpayer I am tired of funding this travesty and as we face American financial meltdown hopefully we understand why now is the time to get with reality.
Posted by WINston smITh at 9:22 PM

Can you imagine the hoorah if Hamas was killing Israelis at the rate that Israelis are killing Palestinians?