Beloit WI, Rolling Out The Red Carpet For The GOP Lincoln Day Dinner 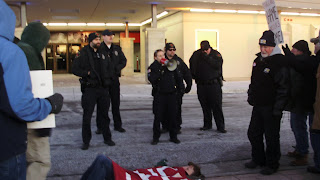 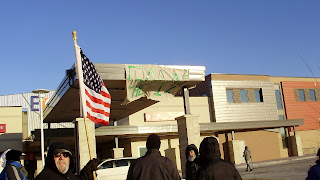 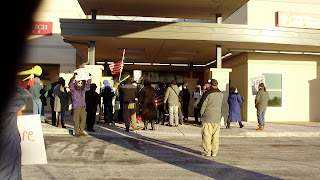 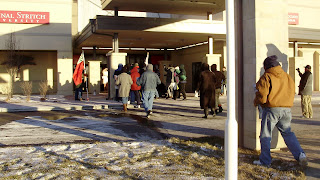 A hearty group turned out in Beloit WI to "welcome" participants at the Lincoln Day Dinner in spite of 18F temperatures and wind chills below that. The primary target of course was Paul Ryan, the would be intellect of the GOP who has laid the ground work for dismantling of what little social safety net exists in this country. The rally was enthusiastic beyond its numbers. The Beloit police were summoned by the apparently terrified republicans who, I am sure, are now regaling their friends of their passing the gauntlet of a frenzied mob of leftists and union supporters. The police, to their credit, were quite restrained and, I suspect, sympathetic to the general message of asking millionaires (and billionaires) to pay their fair share.
Posted by WINston smITh at 11:25 PM

LOL those are some angry, angry Vuvuzelas.
but np, we have Vinehout and Falk to save the day. all that hard work will have been worth it.

Nice pix. See any Confederate flags? Over here in MN we just found out that a West St Paul city councilman flies a Stars'n'Bars on his back deck.

They're coming out of the closet and showing their true colors.

Actually it was a very nice night and no one was really worried about the protestors in a way that fealt threatening, it was actually kind of funny. Most in attendance were neither millionaires, nor part of the one percent. I did not see the Koch brothers either, or get a secret message from them in my program. I did however see and speak with many people who are worried about the future of America and the horrific state of our nations debt crisis and the impact that continued unbridled spending will have on America for decades to come. There are many intelligent people participating in these protests who are being misled into believing that class stratification in America is a net zero game. Wealth is created and lost everyday not because it is given and taken at will by "financial overlords" or "fiscal puppet masters." Wealth is created by making the most of opportunity we as Americans are all granted. We all have that chance to work towards success, personally and as a nation, or to spend our energy and gifts to complain about the success of those who have risen before us.

Dear Anonymous,
I am glad you didn't feel threatened by the action in the parking lot as that was not the point. I will say that "class stratification" has been a top down process for the last 30 years with a growing disparity in wealth fueled in part by the finacialization of the American economy coupled with outsourcing of jobs, destruction of our industrial infrastructure, and debasement of our political process by obscene amounts of corporate influence and money. To be clear this has been a bipartisan effort and the end result is the death of American democracy and the creation of an oligarchic kleptocracy. Thanks for reading the blog.

Anonymous, thanks for speaking positively about your beliefs. In truth, none of us wants anything other than an honest and above-board debate about how to achieve a prosperous future for all Americans. It is, however, quite concerning to us that prosperity, for the last generation, has accrued ever more acutely to a tiny slice of all of us, even as the rest work harder and earn less. It doesn't stand to reason that all of a sudden a small number of people have gotten that much smarter, more creative, or more productive than everyone else. More likely, they have -- as in the historical record repeatedly -- gamed the system and found a way to achieve reward for themselves and deny it to others.

Instead of having that honest debate and recognizing the importance of an egalitarian and win-win social contract, the party to which you belong seems more concerned with protecting that wealth and demonizing the people who have neither power nor wealth nor, increasingly, the opportunity you so warmly cherish.

In this state, even more than in the country at large, the party to which you belong seems smugly determined to operate without the rule of law or even, much of the time, any visible ethics, and by its actions proves daily its subservience to the haves, whether they are the top 1%, top 10%, or the people below that who believe someday they'll be in those categories, while jeering abusively those who are simply struggling the self-same daily calendar to feed their families, save for retirement, or give their kids an education and a better chance than they had themselves. Until you recognize this simple reality, you will always be, no matter what you think, a one percenter through and through.

Thanks Dan For a well put response. I would like to give anonymous the benefit of the doubt regarding the possibility of a reasoned discussion however these folks live in an alternate universe of Faux News and facts which makes this unlikely. The time to be quiet is over. on Beloit WI, Rolling Out The Red Carpet For The GOP Lincoln Day Dinner

I'm sure most conservatives would be happy to have a truly "reasoned discussion" on these issues, but when you have 16 Democrat State Senators voting against thousands of jobs in NW and SE Wisconsin due to their hatred of the governor, I think we are a long way from any reason.