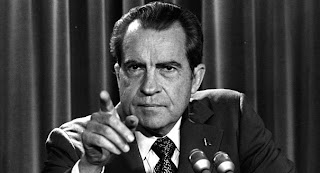 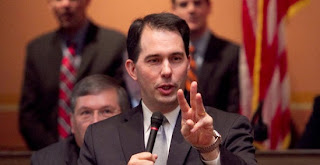 Maybe it's a psychic (or perhaps psychotic) event but Scott Walker is channeling Richard Nixon as reported in the Isthmus:

"With new arrests every week, the FBI probe of Scott Walker's closest aides and supporters is continually uncovering stories that would be front-page news in any other political era. How strained are things around the governor's mansion, where Walker's own spokesman, Cullen Werwie, now has immunity in the FBI probe? No wonder the governor says he wants to hurry up the recall election. So serious are the charges against some of the people closest to Walker, corruption is rapidly becoming a major issue for the coming recall campaign, eclipsing union-busting, budget-cutting, and the fact that, despite massive corporate tax breaks for "job creators," our state continues to hemorrhage jobs. But stealing money from the widows and orphans of Wisconsin's fallen soldiers? That is truly a new low. Obviously, Walker's base isn't going to be too psyched about the child-enticement scandal involving longtime Walker aide Tim Russell and partner Brian Pierick — or the fact that they used Walker's name as a handle on Internet porn sites. But the sociopathic theft of funds intended to help veterans and their families is a much bigger deal, and fits a larger pattern of corruption that could really hurt Walker. "

"The drip, drip, drip of Milwaukee County's investigation into Gov. Scott Walker's old office turned into a stream last week as two of the former county exec's appointees were booked on an embezzlement rap and another man on sex crime allegations. Given that the district attorney indicated there likely will be more — maybe many more — hearings, witnesses, grants of immunity, charges and all the other sundry unpleasantness of honest-to-goodness political scandal, we're really lacking only one thing. This baby needs a name. I say this not just because something short and catchy will provide journalists with a serviceable descriptive replacement for what UW-Madison political science professor Barry Burden said is fast becoming "a complicated web of activities involving charities, sex abuse, pro-Walker websites and travel." But also because without one, its complexity and duration threaten to outstrip the grasp of our short attention spans, leaving the guilty with a better shot at spinning the facts to their favor and avoiding political consequences. So I put out a call last week for nominations, and let me tell you, we've got some work to do. The most popular suggestion by far was "Walkergate." Even Madison state Rep. Brett Hulsey — a consummate Walker-basher on social media and one of the most energetic state Democrats I know — was a fan. "The Walkergate label seems to apply ... because we all want to know, 'What did Walker know and when did he know it?'" he said."

Anyone of a certain age cannot help but be intrigued.
Posted by WINston smITh at 10:01 PM

See, now here's a good example of why I'll never get along with normal political people. You CAN NOT compare anyone to Hitler, which is actually good clean Monty Python-y hilarity in my estimation. But no, Hitler comparisons are JUST TOO MUCH. No Hilter, no Bimmler. no no no!
Now on the other hand, if you wanna be hip and in with the Dem crowd you MUST compare Bad People to Nixon. I guess someone has a compare-o-meter and takes intermittent readings and then issues pronouncements about who it's okay to compare people to, and who not. I was hoping to write a campy-fun blog post comparing someone to Vlad the Impaler or maybe Erzebet Bathory, but I guess it's just time to face the fact that I always say the wrong thing and
*sigh* I'll never be asked to sit at the cool kid's table...never.

I might have been a bit hard....on Nixon who, in today's political climate, would be considered a flaming progressive. Scott Walker will never measure up to Nixon in so many ways.