Unemployment As a Form of Slavery 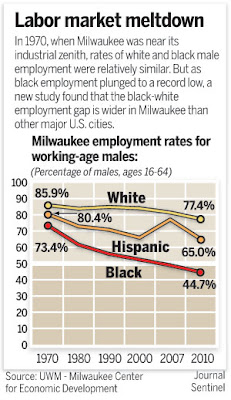 The dismal unemployment rate of African-American men in Milwaukee has hit a historical nadir according to a study by a University of Wisconsin Milwaukee report. As per the Milwaukee Journal:

"According to the UWM analysis of the most recent U.S. Census Bureau data, only 44.7% of the area's working-age black males ages 16 to 64 were employed in 2010, which is "the lowest level in metro Milwaukee ever recorded in census data." Only two of the nation's 40 largest metro areas analyzed in the study - Buffalo and Detroit - reported lower black male employment rates in 2010 than Milwaukee. "No metro area has witnessed more precipitous erosion in the labor market for black males over the past 40 years than has Milwaukee," according to the report, which echoed findings in recent years by the Journal Sentinel. "The 2010 data, however, revealed a new nadir for black male employment in Milwaukee."

Which is a weird way of saying the unemployment rate among Black men is 55.3%. It would also be enlightening to know the percentage of Black men who have the right to vote in Milwaukee.
Posted by WINston smITh at 7:56 PM

Actually I think the math is even more complicated than that as I think former felons don't count as unemployed. They're also not allowed to be hungry or get sick although if they keep their nose clean they can petition the governor to have their status as human beings reinstated.