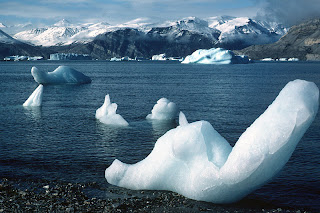 This is the third year I've covered this subject and while not a record setter this year turns out to be the third greatest arctic melt since such things have been followed by satellite since 1979. The National Snow and Ice Data Center puts things in perspective:

"This year, the minimum extent did not fall as low as the minimums of the last two years, because temperatures through the summer were relatively cooler. The Chukchi and Beaufort seas were especially cool compared to 2007. Winds also tended to disperse the ice pack over a larger region.

While the ice extent this year is higher than the last two years, scientists do not consider this to be a recovery. Despite conditions less favorable to ice loss, the 2009 minimum extent is still 24% below the 1979-2000 average, and 20% below the thirty-year 1979-2008 average minimum. In addition, the Arctic is still dominated by younger, thinner ice, which is more vulnerable to seasonal melt. The long-term decline in summer extent is expected to continue in future years."

The Guardian outlines additional perils besides sea level changes and coastal inundations. It seems that volcanoes earthquakes and other geologic phenomena may result due to climate change:

"Reports by international groups of researchers – to be presented at a London conference next week – will show that climate change, caused by rising outputs of carbon dioxide from vehicles, factories and power stations, will not only affect the atmosphere and the sea but will alter the geology of the Earth.

Melting glaciers will set off avalanches, floods and mud flows in the Alps and other mountain ranges; torrential rainfall in the UK is likely to cause widespread erosion; while disappearing Greenland and Antarctic ice sheets threaten to let loose underwater landslides, triggering tsunamis that could even strike the seas around Britain.

At the same time the disappearance of ice caps will change the pressures acting on the Earth's crust and set off volcanic eruptions across the globe. Life on Earth faces a warm future – and a fiery one.

"Not only are the oceans and atmosphere conspiring against us, bringing baking temperatures, more powerful storms and floods, but the crust beneath our feet seems likely to join in too," said Professor Bill McGuire, director of the Benfield Hazard Research Centre, at University College London (UCL).

"Maybe the Earth is trying to tell us something," added McGuire, who is one of the organisers of UCL's Climate Forcing of Geological Hazards conference, which will open on 15 September. Some of the key evidence to be presented at the conference will come from studies of past volcanic activity. These indicate that when ice sheets disappear the number of eruptions increases, said Professor David Pyle, of Oxford University's earth sciences department."

As my friend Mark at Norwegianity has observed trying to have a science based discussion with the reality challenged crowd can be an exercise in futility.

Reality is that which, when you stop believing in it, doesn't go away.
--Philip K. Dick
Posted by WINston smITh at 9:07 PM