Mad as Hell Doctors in Madison 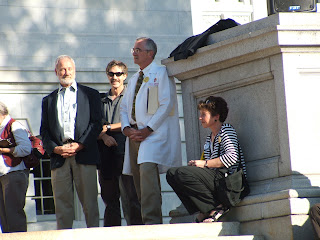 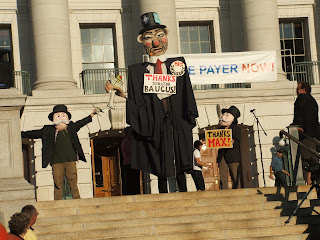 Mad As Hell Doctors made a much anticipated visit to Madison today to further the cause of healthcare for all Americans. A crowd of a thousand or so (according to Mrs. WINston smITh who attended the the rally and provided the above photos) greeted the physicians who've had enough on the steps of the Wisconsin Capitol. These guys along with a kindred group, Physicians for a National Health Plan represent at least 17,000 doctors who have had enough of the American hellth care system. Within the medical profession there is a growing division between the specialists and primary care providers about the need for real healthcare reform. What the politicians don't realize is that the whole system now is basically held together with the economic equivalent of string, chewing gum, and spit. In other words if this attempt at reform fails we will be be in a very bad (as in worse than now)place.
Posted by WINston smITh at 9:47 PM