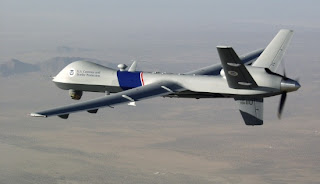 More and more the use of Drone aircraft has become a tool of the U.S. military and the political establishment that serves it. In Pakistan and Afghanistan these are now somehow seen as "humanitarian weapons" that reduce the loss of U.S. servicemen and supposedly civilians as well. In fact they follow an almost 100 year history of aerial war on civilians that has been justified from the outset as a better way of war that in reality seems to be more and more dehumanized.

As Yuki Tanaka and Marilyn Young in their book "Bombing Civlians" point out:

"The ability to destroy an entire city and annihilate its population in a single bombing campaign was not only far more effcient and less costly for the attacker than previous methods of warfare; it also sanitized slaughter.The bombardier never looks squarely into the eyes of the victim, never even sees the victim. The act of destruction has no physical immeadiacy for the perpetrator, as in decapitation by sword or even shooting with a machine gun. This may be particularly important when the principal targets are women, children, and the elderly."

TomDispatch gives a particularly chilling account of drones and their possible future:

"To those who know their air power history, that shouldn't be so surprising. Air power has had a remarkably stellar record when it comes to causing death and destruction, but a remarkably poor one when it comes to breaking the will of nations, peoples, or even modest-sized organizations. Our drone wars are destructive, but they are unlikely to achieve Washington's goals.

The Future Awaits Us

If you want to read the single most chilling line yet uttered about drone warfare American-style, it comes at the end of Christopher Drew's piece. He quotes Brookings Institution analyst Peter Singer saying of our Predators and Reapers: "[T]hese systems today are very much Model T Fords. These things will only get more advanced."

In other words, our drone wars are being fought with the airborne equivalent of cars with cranks, but the "race" to the horizon is already underway. By next year, some Reapers will have a far more sophisticated sensor system with 12 cameras capable of filming a two-and-a-half mile round area from 12 different angles. That program has been dubbed "Gorgon Stare", but it doesn't compare to the future 92-camera Argus program whose initial development is being funded by the Pentagon's blue-skies outfit, the Defense Advanced Research Projects Agency.

Soon enough, a single pilot may be capable of handling not one but perhaps three drones, and drone armaments will undoubtedly grow progressively more powerful and "precise." In the meantime, BAE Systems already has a drone four years into development, the Taranis, that should someday be "completely autonomous"; that is, it theoretically will do without human pilots. Initial trials of a prototype are scheduled for 2010.

By 2020, so claim UAV enthusiasts, drones could be engaging in aerial battle and choosing their victims themselves. As Robert S. Boyd of McClatchy reported recently, "The Defense Department is financing studies of autonomous, or self-governing, armed robots that could find and destroy targets on their own. On-board computer programs, not flesh-and-blood people, would decide whether to fire their weapons."

It's a particular sadness of our world that, in Washington, only the military can dream about the future in this way, and then fund the "arms race" of 2018 or 2035. Rest assured that no one with a governmental red cent is researching the health care system of 2018 or 2035, or the public education system of those years.

In the meantime, the skies of our world are filling with round-the-clock assassins. They will only evolve and proliferate. Of course, when we check ourselves out in the movies, we like to identify with John Connor, the human resister, the good guy of this planet, against the evil machines. Elsewhere, however, as we fight our drone wars ever more openly, as we field mechanical techno-terminators with all-seeing eyes and loose our missiles from thousands of miles away ("Hasta la Vista, Baby!"), we undoubtedly look like something other than a nation of John Connors to those living under the Predators. It may not matter if the joysticks and consoles on those advanced machines are somewhat antiquated; to others, we are now the terminators of the planet, implacable machine assassins.

True, we can't send our drones into the past to wipe out the young Ayman al-Zawahiri in Cairo or the teenage Osama bin Laden speeding down some Saudi road in his gray Mercedes sedan. True, the UAV enthusiasts, who are already imagining all-drone wars run by "ethical" machines, may never see anything like their fantasies come to pass. Still, the fact that without the help of a single advanced cyborg we are already in the process of creating a Terminator planet should give us pause for thought... or not. "
Posted by WINston smITh at 9:27 PM