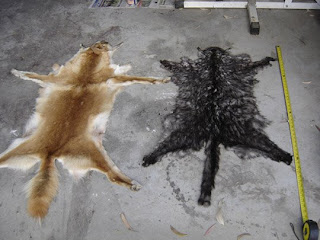 Nouriel Roubini, one of the few to get it, explains the latest stock "bounce":

"Mild signs that the rate of economic contraction is slowing in the United States, China, and other parts of the world have led many economists to forecast that positive growth will return to the US in the second half of the year, and that a similar recovery will occur in other advanced economies. The emerging consensus among economists is that growth next year will be close to the trend rate of 2.5 per cent.

Investors are talking of “green shoots” of recovery and of positive “second derivatives of economic activity” (continuing economic contraction is the first, negative, derivative, but the slower rate suggests that the bottom is near). As a result, stock markets have started to rally in the US and around the world. Markets seem to believe that there is light at the end of the tunnel for the economy and for the battered profits of corporations and financial firms.

This consensus optimism is, I believe, not supported by the facts. Indeed, I expect that while the rate of US contraction will slow from -6 per cent in the last two quarters, US growth will still be negative (around -1.5 to -2 per cent) in the second half of the year (compared to the bullish consensus of +2 per cent). Moreover, growth next year will be so weak (0.5 to 1 per cent, as opposed to the consensus of 2 per cent or more) and unemployment so high (above 10 per cent) that it will still feel like a recession.

In the euro zone and Japan, the outlook for 2009 and 2010 is even worse, with growth close to zero even next year. China will have a more rapid recovery later this year, but growth will reach only 5 per cent this year and 7 per cent in 2010, well below the average of 10 per cent over the last decade.

Given this weak outlook for the major economies, losses by banks and other financial institutions will continue to grow. My latest estimates are $3.6 trillion in losses for loans and securities issued by US institutions, and $1 trillion for the rest of the world.

It is said that the International Monetary Fund, which earlier this year revised upward its estimate of bank losses, from $1 trillion to $2.2 trillion, will announce a new estimate of $3.1 trillion for US assets and $0.9 trillion for foreign assets, figures very close to my own. By this standard, many US and foreign banks are effectively insolvent and will have to be taken over by governments. The credit crunch will last much longer if we keep zombie banks alive despite their massive and continuing losses.

Given this outlook for the real economy and financial institutions, the latest rally in US and global stock markets has to be interpreted as a bear-market rally. Economists usually joke that the stock market has predicted 12 out of the last nine recessions, as markets often fall sharply without an ensuing recession. But, in the last two years, the stock market has predicted six out of the last zero economic recoveries— that is, six bear market rallies that eventually fizzled and led to new lows.

The stock market's latest “dead cat bounce” may last a while longer, but three factors will, in due course, lead it to turn south again. First, macroeconomic indicators will be worse than expected, with growth failing to recover as fast as the consensus expects.

Second, the profits and earnings of corporations and financial institutions will not rebound as fast as the consensus predicts, as weak economic growth, deflationary pressures, and surging defaults on corporate bonds will limit firms’ pricing power and keep profit margins low.

Third, financial shocks will be worse than expected. At some point, investors will realise that bank losses are massive, and that some banks are insolvent. Deleveraging by highly leveraged firms— such as hedge funds— will lead them to sell illiquid assets in illiquid markets. And some emerging market economies— despite massive IMF support— will experience a severe financial crisis with contagious effects on other economies.

So, while this latest bear-market rally may continue for a bit longer, renewed downward pressure on stocks and other risky assets is inevitable.

To be sure, much more aggressive policy action (massive and unconventional monetary easing, larger fiscal-stimulus packages, bailouts of financial firms, individual mortgage-debt relief, and increased financial support for troubled emerging markets) in many countries in the last few months has reduced the risk of a near depression. That outcome seemed highly likely six months ago, when global financial markets nearly collapsed.

Still, this global recession will continue for a longer period than the consensus suggests. There may be light at the end of the tunnel— no depression and financial meltdown. But economic recovery everywhere will be weaker and will take longer than expected. The same is true for a sustained recovery of financial markets.

Nouriel Roubini is Professor of Economics at the Stern School of Business, New York University, and Chairman of RGE Monitor "

I found this site using [url=http://google.com]google.com[/url] And i want to thank you for your work. You have done really very good site. Great work, great site! Thank you!