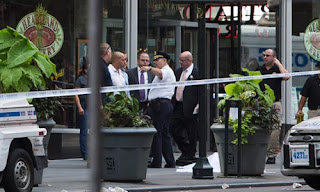 The Guardian reports on the shooting near the Empire State Building in NYC:

"A laid-off clothing designer killed his former manager before being shot dead by police in New York on Friday after a workplace dispute escalated into a shootout near the Empire State Building. At least nine people were wounded during the attack, in one of the most crowded areas of Manhattan. Some of those injured may have been shot by police as they shot at the gunman, who pointed his handgun at them but is understood not to have fired. The shooting led to panic in the tourist-heavy streets around the Empire State Building, with fears that another mass shooting was under way. However, it became clear that it was not a random attack when police revealed that the victim had been targeted... Police named the suspect as Jeffrey Johnson, a 58-year-old who had been employed for six years as a designer of women's accessories at Hazan Imports, a business that operates from premises in midtown near the Empire State Building. New York police commissioner Raymond Kelly said during a press conference that he was laid off as part of a downsizing at the firm. Kelly described the gunman as a "disgruntled former employee" who came back to confront his former manager. "He shot and killed the former co-worker, striking him three times," Kelly said."

"Questions have been raised over the New York police department's handling of a shooting near the Empire State Building after armed officers injured nine passers-by as they pursued a gunman who had just shot dead his former boss. One of those injured by police told the Guardian that officers appeared to fire "randomly" as they confronted Jeffrey Johnson, 58, minutes after a workplace dispute escalated into a chaotic shootout in one of the busiest parts of Manhattan. Reports suggest that while Johnson drew his gun when he was confronted by officers, he did not fire; all those injured appear to have been shot by police."

Oh well what can you say? Thank God it was just some guy who killed his boss and not a deranged mass murderer. Or it was a mass shooting but since the mass shooting was done by the police we can all breath easier. This is so fucked up on so many levels it strains the mind to realize this was a "normal shooting incident". As in a "normal shooting incident" in Iraq or Afghanistan for example.

Keep up the good works guуs I've included you guys to my personal blogroll.

Ηello, Νeat pоst. There's an issue with your site in internet explorer, might test this? IE still is the marketplace leader and a big section of people will leave out your magnificent writing due to this problem.

Wow! This blog looks just like my old one! It's on a entirely different subject but it has pretty much the same layout and design. Excellent choice of colors!