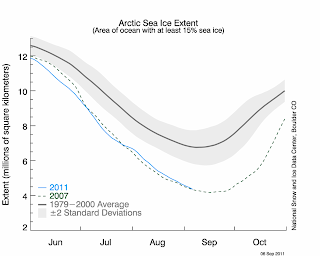 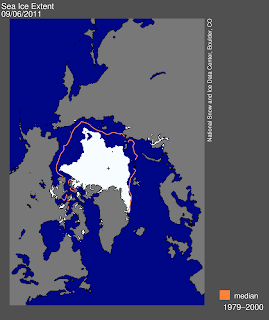 While morons debate the facts reality continues to pile up regarding climate change. The National Snow and Ice Data Center continues the accumulation of facts: "Arctic sea ice extent averaged for August 2011 reached the second lowest level for the month in the 1979 to 2011 satellite record. Both the Northwest Passage and the Northern Sea route appear to be open. Throughout August, sea ice extent tracked near the record lows of 2007, underscoring the continued decline in Arctic ice cover. Note: Arctic sea ice extent will likely reach its minimum extent for the year sometime in the next two weeks. NSIDC will make a preliminary announcement when ice extent has stopped declining and has increased for several days in a row. Monthly data for September will be released in early October."
Posted by WINston smITh at 9:57 PM

and the US officials and other nation's leaders are wrangling right now over the commercial and profit-making rights to that newly opened northern shipping passage.
There's money to be made on this. Plus, since the big apes have crapped in their nests to the South of the Pole they'll wanna be the ones to move north, the serfs can live in heat, squalor and pestilence in what used to be America.
Pretty sure Obama has already got a nice Baffin Bay lot picked out for his cute little Fam up there.


did I mention I hate the Human Race?

I hate the Human Race.

I agree. Where the fuck is "Canadian Nationalism" when you need it? Where is Canadian national energy policy? Where are the cross country pipelines as opposed to the North-South energy suckers?