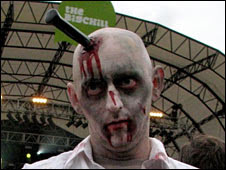 Wisconsin has an open primary system, so Republicans can vote in the Democratic primary. The Democrats defeated their opponents by a spread of more than 30 percent in all but one district suggesting substantial enthusiasm by opponents of one party rule for those recall races. Shelly Moore, a newcomer to politics, is challenging incumbent State Senator Shelia Harsdorf in District 10 and she came out eight points higher than Isaac Weix. While this doesn't mean there is less enthusiasm for Moore, it does suggest there is less of an enthusiasm gap in Harsdorf's district. Turn out was high on both sides with it being the only race where more than 10,000 votes were cast (as of this writing) for a fake candidate (see official numbers here)."
Posted by WINston smITh at 7:13 PM