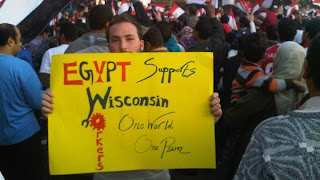 It must have been the Egyptian pizza support of the workers that pushed Scott Walker over the edge and led him to take on the United Nations. From the Fighting Bob blog:

"In 1959, Wisconsin's Governor Gaylord Nelson, so the story goes, decided that the citizens of Wisconsin should be as aware as possible of the United Nations and its aspirations for a world without strife, so he created a unique body, the Wisconsin Governor's Commission on the United Nations, to seek to build that awareness. All governors since then, Republicans and Democrats alike, have appointed commissioners from various civic, religious, labor, business and educational organizations. ...
"Wisconsin’s current commissioners were appointed by both Republican and Democratic governors. I myself was appointed to the Governor's Commission on the United Nations by Governor Jim Doyle in 2004, and I am honored to have been so chosen. It has been a very satisfying experience getting to know my fellow commissioners, and I am firmly of the opinion that we have done valuable work.

But newly installed Governor Scott Walker doesn't think we need this unique institution. We each received a letter from the governor's appointments director thanking us for our service to the state, but announcing, "Recently, the decision was made to not reestablish the Governor's Commission on the United Nations. As a result of this decision, pursuant to Wisconsin Statute, section 14.019, the board [sic] no longer exists at this time."
Incidentally, the commission has operated under an informal budget of about $2,000 per annum, intended primarily for travel reimbursement, and has hardly ever been used. All of us volunteer our time and expenses for this cause.

Dag Hammarskjold, the Swedish diplomat who was the U.N.'s first Secretary General, said, "The U.N. is not just a product of do-gooders. It is harshly real. The day will come when men will see the U.N. and what it means, clearly. Everything will be all right - you know when? When people, just people, stop thinking of the United Nations as some weird Picasso abstraction, and see it as a drawing they made themselves."

All of the citizens of the world should be represented and heard if the world body is to fulfill its challenge. But do all Americans understand that challenge, the goals, successes and occasional failings of the U.N.?

A Wisconsin institution with a 52-year history, the only one of its kind in the United States, is no more. Why? I think we deserve an answer to that question. It has not been an expensive program - virtually no money at all - and has lent our state considerable prestige in international circles. We are told repeatedly that we are living in an increasingly global environment. Doesn't it make sense that we educate Americans on the role that the United Nations can and should play in this?

As of now, I believe that we will continue our efforts as an ad hoc group. We enjoy communicating with each other and feel that we are doing good work, so we'll likely continue without official state sanction. But it's sad that Wisconsin has lost this distinction."

Union busting xenophobic assholes on the loose.
Posted by WINston smITh at 9:42 PM