Report: US Nuke Weapons Drivers Got Drunk at Work 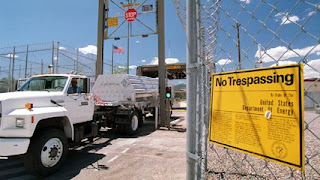 I was so shocked by this report I almost spilled my wine. From AOLNews (of all places):

"Federal agents driving convoys carrying America's nuclear weapons and other sensitive material sometimes got drunk on the job, and two agents were detained by police during an "incident" at a bar while on duty, according to an internal Energy Department report.

Another agent was arrested for alleged public drunkenness. Altogether, the department cited 16 alcohol-related infractions among nearly 600 workers at the Office of Secure Transportation between 2007 and 2009. "
......
"The agents are responsible for transporting -- usually by truck -- nuclear weapons, weapons components and other nuclear materials between laboratories and facilities around the United States. They undergo a 21-week program that's supposed to train them to be discreet, and how to defend the shipments from possible attacks or sabotage.

The report also cited problems with paperwork, including missing signatures on forms used to report violations of OST rules. The department also missed the one-year deadline to re-certify at least 17 of its agents, allowing them to continue working without required checks, it said.

The National Nuclear Security Administration, which oversees the OST, issued a statement defending its agents and noting that the report did not find evidence that anyone was driving while intoxicated. Agents have safely transported nuclear materials more than 100 million miles without a deadly accident or release of radiation, it said.

"NNSA takes each of these cases very seriously and is working to evaluate the inspector general's report and make additional improvements to the program," NNSA spokesman Damien LaVera said in the statement, excerpted by The Washington Post.

The findings also alarmed some lawmakers on Capitol Hill.

"I was appalled to learn that some couriers responsible for transporting nuclear weapons and material were found to be drinking on the job," Rep. Jim Langevin, D-R.I., who chairs the House Armed Services strategic forces subcommittee, told The Associated Press. He said he would seek a full briefing from the inspector general.

"We cannot tolerate any behavior that falls short of the level of excellence required and expected when it comes to protecting and handling our nation's most powerful and dangerous weapons," he said."
Posted by WINston smITh at 10:32 PM