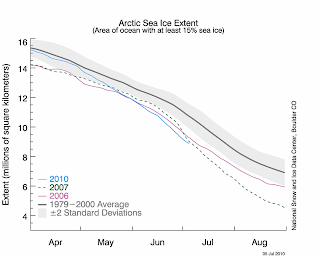 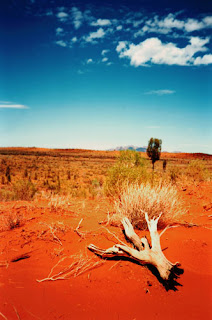 While one hot summer is not a trend in itself latest data supports a distinct warming of the climate. An article in the Guardian discusses new information from NOAA:

"Last month was the hottest June ever recorded worldwide and the fourth consecutive month that the combined global land and sea temperature records have been broken, according to the US government's climate data centre.

The figures released last night by the National Oceanic and Atmospheric Administration (NOAA) suggest that 2010 is now on course to be the warmest year since records began in 1880.

The trend to a warmer world is now incontrovertible. According to NOAA, June was the 304th consecutive month with a combined global land and surface temperature above the 20th-century average. The last month with below-average temperatures was February 1985. Each of the 10 warmest average global temperatures recorded since 1880 have occurred in the last 15 years with the previous warmest first half of a year in 1998.

In the Arctic more evidence accumulates:

"In a further possible sign of a warming world, the Jakobshavn Isbrae glacier, one of the largest in Greenland, lost a 2.7-square mile chunk of ice and retreated one mile between 6-7 July – one of the largest single losses to a glacier ever recorded.

The glacier, a tongue of the Greenland ice sheet, has retreated six miles since 2000 and more than 27 miles since 1850. It is believed to be the single largest contributor to sea level rise in the northern hemisphere.

Greenland's ice sheet, a vast body of ancient ice covering 1.7m sq km, is melting today more rapidly than only a few decades ago. Since 2000, the ice sheet is calculated to have lost about 1,500 cubic kilometres of water– enough to raise global sea levels by 5mm . If the entire ice sheet melted, the world's oceans would rise by over six metres.

Glaciologists expressed surprise at the speed of the break-up of the glacier: "This is unusual because it occurs on the heels of a warm winter that saw no sea ice form in the surrounding bay ... it lends credence to the theory that warming of the oceans is responsible for the ice loss observed throughout Greenland and Antarctica," said Nasa scientist Thomas Wagner.

"These are clear signs of a rapidly warming world and exactly what the climate models have predicted. Thankfully, there is a way out of it if we can get greenhouse gas emissions under control," said Ben Stewart of Greenpeace."

The last quote sounds like bleeding optimism. The National Snow and Ice Data Center suggests that this summer may see the largest melting of polar ice, beating the record set in 2007:

"Average June ice extent was the lowest in the satellite data record, from 1979 to 2010. Arctic air temperatures were higher than normal, and Arctic sea ice continued to decline at a fast pace. June saw the return of the Arctic dipole anomaly, an atmospheric pressure pattern that contributed to the record sea ice loss in 2007."
Posted by WINston smITh at 11:14 AM