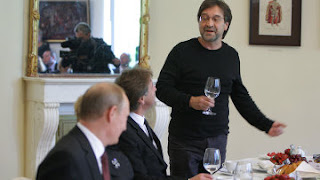 "Famous Russian rocker Yuri Shevchuk asked the PM some uncomfortable questions at a tea party with artists and musicians.
Vladimir Putin visited St. Petersburg on the weekend where he attended a charity literary-musical evening for children with cancer and leukemia, and met with its participants and organisers. In the course of the tea party an outspoken critic of Putin, rocker Yury Shevchuk, asked him some awkward questions.
At first Putin asked the Russian rock legend what his name was, even though people who go to these events claim that political leaders receive a list of all the guests, their names and occupations – and the seating plan.


After clarifying his name and occupation, Shevchuk started by saying that an aide to Putin had called him in the evening and advised him on what questions he could and could not ask. When Putin said such a thing could not happen, Shevchuk said the caller was a maverick.
However, liberal economist Andrei Illarionov, who used to work as Putin’s adviser until 2005, wrote in his blog that before such events an aide of the president or prime minister always calls participants to discuss logistics and topics of conversation.


Shevchuk then told Putin that he was concerned about freedom of the press, inequality of different social layers and the state’s attempts to cultivate an ostentatious patriotism. “We’ve done that before,” said the musician.

He also asked the prime minister if he was aware that the number of protesters was growing and if he planned “serious, sincere, honest liberalisation and democratisation of the country,” when public organisations are “not strangled" and the people are “no longer afraid of a policeman … who serves the superiors and his own pocket, and not his people.”
Shevchuk finished by asking if the opposition marches on May 31 in St Petersburg was going to be dispersed by police.


Putin replied that “the country has no future without normal democratic development.”
As to the opposition protests planned for the evening of May 31, Putin said that “there are certain rules” and that “these events are regulated by the local authorities.”
Putin said that the authorities would be right to ban marches and demonstrations where they were held somewhere that interfered with the normal life, like “next to hospitals,” but that he hoped that in St Petersburg everything would be done right, “with the citizen’s right to express their discordance with the authorities’ politics on such and such issues.”
He added that these events did not “interfere with me or other representatives of the state authorities; on the contrary, it helps.”


Illarionov in his blog commented that the law on demonstrations did not mention protests held next to hospitals.
On Sunday evening, Putin’s press secretary Dmitry Peskov clarified up his answers on Echo Moskvy radio. “There have been calls to come to demonstrations, because Putin allowed and no one will touch them. That is not the case, Putin did not allow anything, because he cannot allow, local authorities do it. Putin said that everything has to be within legal boundaries.”
Posted by WINston smITh at 9:40 PM

You mean, that infamous guy?