Extremists in Our Military 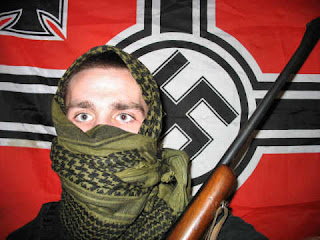 While the usual xenophobic speculation is churned in right-wing media sources after the massacre at Ft. Hood, a more concerning form of extremist infiltration has been going on in the armed forces for years without much notice. This would be neo-Nazis and white supremacists gaining access to military training and Lord knows what else courtesy of the U.S. Defense Department. The Stars and Stripes reported thus:

"In 2006, the SPLC (Southern Poverty Law Center) released a report asserting that “thousands” of active-duty troops like clarkpatrick88 could have hate group affiliations. The law center said that some military officers conceded that recruitment and retention pressures forced them to look the other way when presented with overwhelming evidence of hate group membership.

Later, the FBI said it suspected hundreds of servicemembers had been recruited into extremist groups."

Opposing Views notes this is a problem identified since at least the 1990s:

"The SPLC again brought the problem to the attention of Pentagon officials in 1996, after three neo-Nazi soldiers stationed at Fort Bragg murdered a black couple in North Carolina in a ritualistic, racially motivated slaying. Pentagon regulations were strengthened following an investigation by an Army task force and hearings by the House Armed Services Committee.

But a decade later, military recruiters, under intense pressure to meet quotas for the wars in Iraq and Afghanistan, appear to have lowered recruiting standards, according to the SPLC's 2006 report. The report revealed that large numbers of neo-Nazi skinheads and other white supremacists were joining the armed forces to acquire combat training and access to weapons and explosives.

In 2008, the FBI released an unclassified report that supported the SPLC's findings. This past April, the Department of Homeland Security issued a report stating that right-wing extremists currently pose the most significant threat of domestic terrorism and expressing the concern that they may attempt to exploit the combat training and experience of returning veterans.

The SPLC letter notes that since 1994 the military has discharged more than 12,500 servicemembers simply because of their homosexuality. "It seems quite anomalous that the Pentagon would consider homosexuals more of a threat to the good order of the military than neo-Nazis and other white supremacists who reject our Constitution's most cherished principles," said Mark Potok, director of the SPLC's Intelligence Project, which monitors extremist activity."
Posted by WINston smITh at 2:30 PM