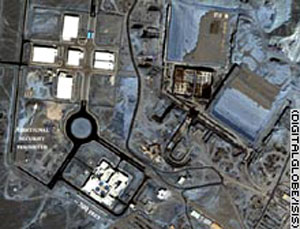 War in Iraq seems to grow ever closer. The British military are holding a meeting to discuss the ramifications of an event they describe as inevitable.The Americans are looking to test the largest open air chemical explosion ever in Nevada in June.Whether this represents squeamishness over the use of nukes or is just a simulation of a 14 kiloton a-bomb remains to be seen. The Iranians for their part just launched a new missile that will do little to calm things. Afrika Bambaataa's "World Destruction" Kah boom Kah boom seems even more relevant than it was 22 years ago.
Posted by WINston smITh at 8:50 PM