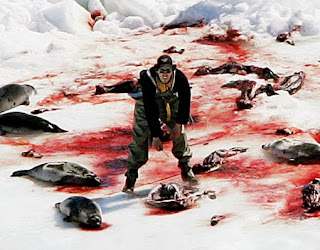 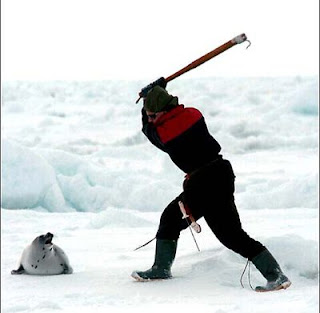 Yury Trutnyev, the Russian Minister of Natural Resources, announced a ban on the hunting of all harp seals less than one year old. "This bloody hunting is from now on banned in our country, as in most developed countries. This is an important measure to preserve Russia's biodiversity," he said. The Russian ban effectively ends commercial seal hunting in that country, as most of the market for pelts comes from seals less than a year old, reported The National Post. A quota had previously allowed for the harvesting of up to 35,000 seals in the White Sea, near Russia's border with Finland."
Posted by WINston smITh at 9:39 PM

I HATE THAT PERSON WHO IS TRYING TO KILL THAT INNOCENT BABY SEAL. WHAT DID THAT SEAL EVER DO TO YOU??? HUH?? NOTHING, EXACTLY SO STOP STUPID PERSON.