Workers Of The World Do Something 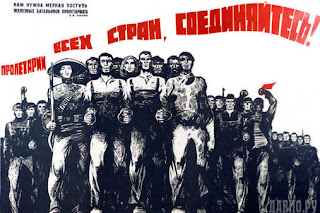 Russian workers have expressed their opinion, they don't accept 60 hours/week without overtime. From RIANOVOSTI:

Russians are ready to work longer than the current 40-hour week, but want to get more than their basic wage for this additional labor. This is why they have rejected billionaire Mikhail Prokhorov’s idea. He suggested formalizing a 60-hour working week without paid overtime.

According to a recent survey conducted by the national pollster VTsIOM, 77% of respondents are not ready to work more than 40 hours a week for their basic salary. This is understandable, as nearly half of Russians currently get additional pay for working overtime.

Similarly, 61% of respondents blackballed Prokhorov’s proposal that educational leave should only be granted to working students who were sent to a college or university by their employer. There are few such students in Russia. Most students who take on a job to pay for their education or housing will be unable to combine their studies with employment if this law is approved.

Half of Russians are against giving the employer too much freedom: 51% of the respondents do not think employers should have the right to change the working hours, payment and other conditions of a labor contract because of a crisis or falling demand.

At the same time, the respondents support Prokhorov’s idea that labor contracts be concluded with pensioners and inexperienced young people, provided the contract is signed for a minimum of 12 months. They also think employers should be allowed to extend fixed-term contracts as many times as they need (provided the employee agrees of course), and agree that probationary periods be cancelled for people the employer sends on further education courses."

"Last year, Prokhorov suggested amending the labor code to increase the working week by 20 hours to 60 hours and to give employers more freedom to manage their labor force. He said social guarantees and motivation should be tied to labor productivity, which is low in Russia compared to developed states."

Mikhail Prokhorov is the owner of the New Jersey Nets and is the 39th richest guy in the world and hopes to start what is essentially the Oligarchs Party in Russia. Makes Putin look rather progressive.
Posted by WINston smITh at 10:31 PM