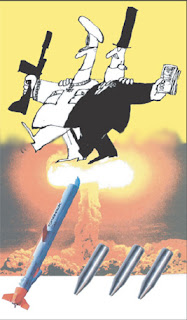 The Herald of Scotland reports that the management of the British nuclear weapons base at Coulport is being privatized and will be run by a corporate consortium headed by Lockheed-Martin:

"THE running of Britain’s nuclear bomb base at Coulport on the Clyde is to be handed over to a consortium of multinational private firms led by the controversial US arms dealer, Lockheed Martin, the Sunday Herald can reveal.

Defence ministers in Westminster have decided that the highly sensitive job of managing more than 200 Trident nuclear warheads, and arming the Royal Navy’s submarines with them, should be taken over by the group of companies within the next year.....

"Angus Robertson, the SNP’s defence spokesman and the party’s leader in Westminster, attacked the decision as “highly questionable” last night.

“Weapons of mass destruction are the most sensitive areas of military technology and should not be put in private hands,” he said.

“The SNP opposition to the nuclear fleet is absolute, but as long as Trident and nuclear missiles remain on the Clyde, their security must be absolute and UK ministers should reconsider their decision to give responsibility to companies outwith the country.”

"COULPORT’S Royal Naval Armaments Depot is meant to be one of the most secure places in Britain. Sprawled across the slopes above Loch Long, surrounded by cold war-era watchtowers and fences, are buildings and bunkers in which Britain’s nuclear bombs and missiles are kept.

The fact that private companies were bidding to take over running the site caused a furore when it was first disclosed by the Sunday Herald last October. At the time, the MoD said that Coulport’s management was under review, but insisted that no decisions had been taken. Now, however, arrangements for transferring management to ABL have begun.

According to the leaked MoD plan, ABL will be responsible for “processing, handling, and storage” of Trident warheads and missiles, along with “dockside handling”, “explosive handling”, “radiological safety” and “nuclear emergency response”.

This if anything shows that there is no limit to the monetization and corporatization of the most sensitive and potentially catastrophic of human activities. Obviously Fukushima and the Gulf Oil catastrophe, both corporate ventures within the past year alone, have changed nothing in the relentless pursuit of profits over common sense.
Posted by WINston smITh at 11:08 AM