Fitzwalkerstanization Or The Rabid Badger 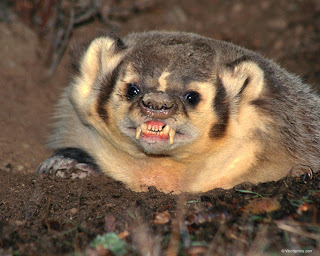 While our oligarchic kleptocrats running Fitzwalkerstan have never been big on facts and figurin the recent numbers suggest that things aren't going so well in the place "open for business". Here's a few things to mull over your Spotted Cow:

"Wisconsin ranks 19th nationally in child poverty":
"Child poverty, across the country, increased in 38 states from 2000 to 2009, according to a recent report by the Annie E. Casey Foundation.

Wisconsin fared better than the national average, but followed the same trend, with children in poverty rising from 10 percent in 2000 to 17 percent in 2009, putting the state at No. 19.

Researchers concluded that low-income children will likely suffer academically, economically and socially long after their parents have recovered.....
Wisconsin came in 12th, showing improvement in teen birth rate and infant, child and teen mortality rates. However, the amount of low-birthweight babies, children in poverty and children in single-parent families grew.

Mississippi had the most children living in poverty, with 31 percent..."

Not necessarily Scott Walker's fault but considering his policies unlikely to get better.

And of course there's Milwaukee, Little Johannesburg, worse than Mississippi:

"One out of three school-age children in Milwaukee lived with a family in poverty in 2005, according to U.S. Census Bureau estimates released Wednesday.

I kind of doubt that this number has gotten any better either.
Posted by WINston smITh at 10:41 PM