American Decadence And Decline: A Potpourri 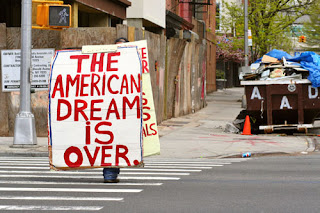 Peter Marmarek at Tikkunista brings together four sources which highlight yet another few weeks in the Bizzaro world known as the U.S.A. Here are some exerpts:

"Corruption and decadence doesn’t occur all at once; it’s a progressive disease with no clear tipping point. Part of it lies in the rise of the conservative movement post-Goldwater, when wealthy conservatives began to bankroll think tanks and media organs who were more interested in waging political warfare than getting facts right. Part of it is a pop-media culture that lets an ignorant buffoon like Rush Limbaugh or a bizarre whack-job like Glenn Beck become influential voices in our national debate. Part of it is the culture of non-accountability that is pervasive in official Washington, where the frauds that helped produce the financial crisis of 2007 barely get investigated, or where a Deputy Secretary of Defense can play a key role in causing the Iraq debacle and then get rewarded by being named President of the World Bank, screw that up too, and bail out to a safe sinecure at a D.C. think tank. As L’affaire Weiner demonstrates, in today’s America, you’re more likely to derail your career by sending some lewd and idiotic tweets than by sending thousands of your fellow citizens to their deaths (along with tens of thousands of Iraqis) in an unnecessary war......"

"Americans live in a late capitalist society where the rich have gotten many times richer and the middle class has gotten poorer, where Wall Street bankers have stolen us blind and blamed us for living above our means, where persistent unemployment is worse than in the Great Depression, where most politicians and some judges have been bought by corporations or special interests, where authorities actively conspire to keep people from voting, where the government spies on citizens assiduously without warrant or probable cause, and where the minds of the sheep are kept off their fleecing by substituting celebrity gossip, sex scandals, and half-disguised bigotry for genuine news....."

"With Tea Party conservatives and many Republicans balking at raising the debt ceiling, let me offer them an example of a nation that lives up to their ideals.

It has among the lowest tax burdens of any major country: fewer than 2 percent of the people pay any taxes. Government is limited, so that burdensome regulations never kill jobs. This society embraces traditional religious values and a conservative sensibility. Nobody minds school prayer, same-sex marriage isn’t imaginable, and criminals are never coddled. The budget priority is a strong military, the nation’s most respected institution. When generals decide on a policy for, say, Afghanistan, politicians defer to them. Citizens are deeply patriotic, and nobody burns flags.

So what is this Republican Eden, this Utopia? Why, it’s Pakistan."

We can only assume that this is what a judge in Broward County, Fla., Barbara McCarthy, learned back at St. Thomas University Law School in northwest Miami — justice is blind, unless you’ve got money, in which case justice is a cash register.

Maybe you caught the news story over the weekend. An overgrown brat from suburban Barrington Hills, Ryan LeVin, 36, who had run over and killed two men while drag racing his Porsche in South Florida, was sentenced by Judge McCarthy to a mere two years of house arrest — in one of his wealthy parents’ luxury oceanfront condos — after agreeing to write big checks to the victims’ widows.

LeVin could have been sentenced to up to 45 years in prison for killing the two British businessmen and fleeing the police, and in fact nobody in Broward County can recall another time when a person found guilty of such a crime did not serve time in prison…."

Read the whole series here...
Posted by WINston smITh at 10:38 AM